Considering this is the first of Peugeot’s new ‘8’ generation of models, you’d be forgiven for thinking more of a fanfare might have been made about the launch 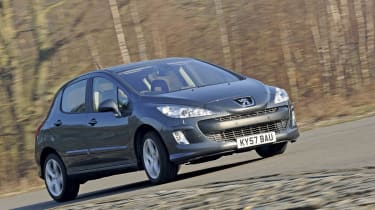 Considering this is the first of Peugeot’s new ‘8’ generation of models, you’d be forgiven for thinking more of a fanfare might have been made about the launch. After all, the replacement for the 307 represents the next phase in the French firm’s plan to improve reliability and quality.

It’s also a surprise that the 308 looks so similar to the car it replaces. We think Peugeot could have been more daring with the design – although when you find out that the newcomer is based on the same underpinnings as its predecessor, things start to make more sense.

Viewed in profile, the old and new models are incredibly alike – they even have the same wheelbase – yet from the front, the 308 has more in common with the 207 supermini. The long nose, gaping grille and raked headlights are all similar, while the clean rear has a simple look resembling the larger 407’s. It’s neater than the 307, but sadly it’s just as anonymous, especially when compared to the Civic or Qashqai.

The 308 is slightly longer and wider than the previous car, although most of the length has been added to the nose to boost crash protection, so the interior isn’t much bigger than before. This is evident in the boot – it’s the smallest here by 50 litres, while the load lip is high. Worse still, in order to fold down the rear seats, the front chairs have to be slid forward, and once flipped up, the seatbases are attached with flimsy hinges. This certainly doesn’t inspire the confidence in build quality that Peugeot is aiming for.

There’s better news up front. The firm wanted to enhance the look and feel of the cabin, and it has certainly been successful. The improved materials give the 308 a sense of quality that’s on a par with its rivals here, and the fresh centre console, white dials and circular air vents are neat touches. We also like the air-conditioning controls, but the fiddly stereo feels cheap and is a bit of a letdown, as is the tiny glovebox and rather shallow cup-holders.

The turbocharged 1.6-litre THP engine is the same as that found in the 207 GTi, although it has been detuned to 150bhp. That still gives it more power than any of its rivals here, and crucially considerably more torque, at 244Nm. This is available from 1,400rpm, but the turbocharged unit’s performance is hampered by the poor five-speed transmission. The sloppy shift is the weak link in the driving experience.

The THP engine does its best to compensate, though. It delivers decent pace – 0-60mph takes 8.9 seconds – and responds without lag. In-gear performance is good, too, as the Peugeot posted the fastest acceleration of the three manual cars.

As with its opponents, the 308 provides a decent balance of ride and handling. But it doesn’t quite grip as well as the Focus or Civic, and although the steering is meaty, it lacks feedback. The Peugeot is composed through corners, yet the dampers can be a little jittery over rough surfaces, and it’s not as engaging to drive as its rivals. It is smooth and refined – a reading of 69dB at 70mph is much quieter than the Focus’s 72dB – but the 308 doesn’t have much character or charm.

At £16,895, this SE is also the most expensive car on test – although it is the only one to have seven airbags. It comes with a panoramic glass roof, climate control, rain sensors and cruise control all as standard, too. The Peugeot has longer servicing intervals than the other three cars here, but the dealer network performed very poorly in our Driver Power 2007 survey. The firm needs to get this right if it wants to improve its image among the British motoring public.

It’s the smallest powerplant here, but the 308’s 1.6 turbo is the most powerful, offering 150bhp. This has an adverse affect on consumption – we averaged a mere 32.8mpg.

Peugeot also needs to address the quality of its garages. While the 308’s 20,000-mile intervals are the longest here, the firm managed only 28th in our Driver Power poll.