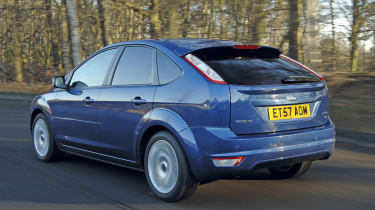 Improved, refined and redesigned. That is how Ford describes the latest Focus, although we’d also like to add conservative to that list. But with rivals as bold and distinctive as the Civic and Qashqai to compete against, Ford’s designers were always going to have a tough task giving the Focus equal visual impact.

The main changes are at the front, where a bold new face brings it in line with the kinetic design philosophy applied to the firm’s S-MAX, Galaxy and C-MAX people carriers, and most recently the Mondeo. Big grilles, swept-back headlamps and bonnet creases mean that when it’s viewed front-on, the facelifted hatch is incredibly similar to the latter. The Focus certainly has more presence than before, although it still lacks the cutting edge of the first-generation model.

With the absence of rubbing strips on the doors and redesigned bumpers, it has a cleaner side profile. And this more sophisticated air is echoed inside. The tweaks are subtle, but elements such as the new silver finish on the centre console and the soft-touch dash give a more upmarket feel.

The new instrument cluster is easier to read, while the dials themselves are chrome-ringed. One minor criticism is that some of the buttons on the stereo are small and a little fiddly.

But there are no such gripes with the excellent driving position, nor with the ergonomics – all the controls are well laid out. It’s not as funky looking as the Civic’s dash, while quality is on a par with the Peugeot 308.

Overall, Ford has pretty much left the rest of the Focus interior alone. That means it’s still not quite as practical as the Civic, so although rear passengers are well catered for, boot space is merely average, and there’s a lack of storage around the cabin. Considering Ford claims this is a comprehensive makeover, that’s disappointing. However, the fit and finish is excellent, and the switches and controls have a precise action.

As with the other engines in the range, the 2.0-litre Duratec unit remains unchanged. It’s a smooth and polished performer even under hard acceleration, pulling well all the way up to the red line. And while it’s not as rev happy as the i-VTEC unit in the Civic, it feels the most refined of the four powerplants. It also provided strong performance at the test track, propelling the car from 0-60mph in a very respectable 8.8 seconds – although the Focus couldn’t match the turbocharged 308 for in-gear acceleration.

Out on the road, the Ford feels the most relaxing to drive, thanks to the engine’s fuss-free nature – it just seems to get on with the job of transporting you from A to B as easily as possible. Yet there’s much more to the car than this. The model has always been renowned for its driving dynamics, and the new version is no exception.

This all-round ability is what makes the Focus such a great family choice. The blend of ride and handling is a prime example. It’s not quite as firm as the Honda and deals better with potholes, but it’s just as focused and balanced through corners. Perfectly weighted steering and a crisp gearshift add to the package.

Prices for the facelifted Focus have risen by £250 across the range, yet stability control is now standard on all cars. That’s good, and it still undercuts the Peugeot by £370. But our mid-range Zetec doesn’t represent brilliant value for money. Climate control is a £400 extra and cruise control will cost a further £200 – both come as standard on the 308 and Civic.

Arguably of more concern for private buyers is the fact the Ford has the poorest residual values here. Will that count against it in the final verdict?

The Focus engine line-up has been carried over from the pre-facelift car. The 2.0-litre petrol unit in our model returned a decent 34.2mpg – not too far off the claimed figure of 39.8mpg.

It’s a big seller, but that does the Focus few favours on the used market. After three years, the Ford will be worth only 33.4 per cent of its price new – that’s £5,443.

Ford’s Focus is a hugely popular company car, but the diesels make more sense. The 2.0-litre petrol emits 169g/km of CO2, so lower-band owners will pay £717 per year.