Ultimate Brit hot hatch looks and sounds irresistible. Is there a catch? 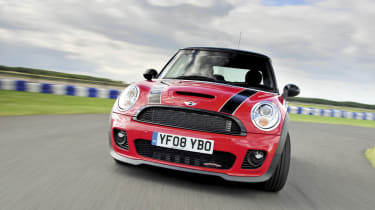 The latest MINI flagship has more pulling power than any model ever to have rolled out of BMW’s Oxford plant – and we are not only talking about mechanical torque!

Combining the classic MINI shape with thrilling performance and the legendary JCW badge has created a near-irresistible package for hot hatch fans. Not only is the car’s 280Nm torque output the firm’s highest ever, but chassis engineers claim to have cracked the problem of feeding more than 200bhp through the front wheels of a supermini.

The new John Cooper Works certainly looks the part. Unique 17-inch alloy wheels, an aerodynamic bodykit and extra badges mark this model out as the range-topping MINI hatch. And make no mistake – this is no half-baked special edition. The engine, transmission and brakes have all been developed with the help of the MINI Challenge race series – this car has been bred on the track for ultimate driving ability.

Under the bonnet, the 1.6-litre engine has a new, larger turbocharger to deliver even more thrust. Meanwhile, a racy exhaust system not only gives more power but also looks great and sounds fantastic.

Climb into the MINI’s distinctive cabin and you will find only subtle tweaks over the standard Cooper S. A sports leather steering wheel is standard, while the H-gate pattern on the gearknob is finished in red. The final design change is found on the large central speedometer, which has been adapted to read up to 160mph. This gives some clue to the potent performance on offer, but nothing can prepare you for the JCW’s pace. In short, it blows all other hot hatches into the weeds. Press the start button and the MINI bursts into life with an angry burble from the exhaust. Activate the Sport setting to sharpen the steering and throttle response as well as give extra boost lower down the rev range, then hold on tight!

We recorded our performance figures after heavy rain, and despite wheelspin in first and second gears, the MINI managed the 0-60mph sprint in 6.9 seconds – the same as the Clio and two-tenths ahead of the Civic, which were both tested in the dry. In-gear pace where traction wasn’t such a problem is more revealing – thanks to its overboost torque function, the JCW can provide 280Nm of torque between 1,850rpm-5,600rpm with devastating results. Neither rival could keep up in a straight line.

However, hot hatches really prove their worth when cornering. Helping to harness the JCW’s 208bhp in bends is a hi-tech new front differential to work hand-in-hand with Dynamic Traction Control.

Activating DTC via a button by the gearlever allows a little more wheelspin before the Dynamic Stability Control steps in. Holding the button down to deactivate both systems enables pure, uninterrupted enjoyment of the MINI’s chassis.

It’s only in this mode that you begin to feel the benefits of the JCW’s ace in the pack – its new Electronic Differential Lock Control. Anyone who has ever driven a standard Cooper S will know the most frustrating part of an otherwise fantastic hot hatch is experiencing excessive spin from the unladen inside front tyre when exiting corners. Not so in the new flagship, which uses its clever differential to feed power to the other wheel if it detects any slip.

The benefit for the driver is that the power output is never hindered – and neither is the fun! Use all of the MINI’s muscle to exploit the diff and you’re in for a treat. As torque transfers between the front wheels the car can dart through corners at great speed, the nose sniffing out the best line.

Dealing with this torque steer isn’t something that drivers of the more relaxed Civic Type R or more planted Clio need to worry about. However, it only adds to the drama in the JCW and makes you involved at much lower speeds. What’s more, the steering offers more feel than the Renault and there’s a finesse in the pedal set-up and strengthened six-speed manual box that simply isn’t evident in either rival. The MINI is also more comfortable than its French counterpart on long trips, with a ride quality that’s firm but not crashy.

In fact, all that’s lacking from the MINI package is the Honda’s versatility. This is not only down to its tiny boot and tight rear space; its manic character means it’s never relaxing to drive. Then you come to the cost. The JCW is the most expensive car here to buy: at £20,995, it’s at the top of the hot hatch price lists. Will the mad MINI prove too intense to triumph in this company?

There’s good news and bad for buyers of the John Cooper Works: it’s in the showroom when initially buying the car that your bank balance will suffer most. At £20,995, the MINI is the most pricey model here, and it is also offered with an extensive range of options. In contrast, running costs are low. Not only is the British model the most economical in our test, but it also qualifies for the unbeatable tlc servicing package, which gives owners five years’ maintenance for only £150. Low emissions mean relatively cheap company car tax bills, too.