Space-age looks of our champ won’t suit all 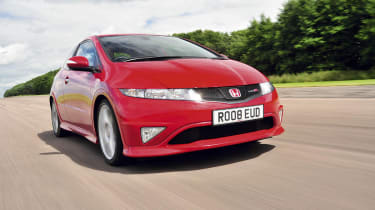 A Full-sized compact family hatchback in the company of two superminis, the Honda Civic is the heavyweight of our group. And it’s not only the size that makes the Type R the one to watch – it is Auto Express’s current class-leading hot hatch. Now that it’s been on sale for nearly 18 months, has the Honda’s appeal dulled or is it just as impressive as ever?

One thing’s for sure: the Civic’s visual impact hasn’t diminished. Although the space invader looks of the Type R will never be to everyone’s taste, its appearance is undeniably striking.

Inside, the Honda is as distinctive as the MINI is retro. Designers have resisted making any compromises from their vision of the ultimate dashboard, and the result is an interior that takes a bit of getting used to.

We can’t forgive the poor visibility caused by the windscreen-mounted rear spoiler, and it’s impossible to achieve the perfect driving position without obscuring the speedometer or rev counter. Reaching behind for the seatbelt will also be an awkward affair for most drivers, while the chairs don’t return to a set position if you slide them forward to let passengers get into the back seats.

At least they are both supportive and comfortable, though, adding to the sense of occasion in the cabin. The seats in the MINI look ordinary in comparison.

Press the big red start button that’s featured in all those Honda TV adverts, and the engine sounds quiet and subdued. Once on the move, refinement remains leagues ahead of both competitors, until you reach the magic number on the rev counter: 5,500rpm.

It’s then that Honda’s legendary VTEC variable valve timing system kicks in and transforms the 2.0-litre powerplant from mild-mannered to hard-edged. Keep the revs high and the Civic screams because it wants to go faster, delivering a touring car soundtrack.

The Japanese firm has always resisted turbocharging for fear of the dreaded lag interrupting the pure power delivery. Yet ironically, the latest twin-scroll turbo used by MINI offers a more lag-free experience than the Honda’s standard set-up, as it doesn’t need to wait for any cam timing technology to leap into action at high revs before it gets going.

Even on our test track, where we were able to use the VTEC revs all the time, the Civic was the slowest of our trio, clocking 7.1 seconds for the sprint from 0-60mph. In the real world, the Honda feels more sluggish than the MINI JCW, often bogging down if you’re in the wrong ratio.

Thankfully, you’ll never tire of the superb gearchange. It works perfectly if you balance the revs with the light pedals, whether you’re shifting up or down. To get the best out of the Civic’s engine, then, you need to push it hard. And the same is true of the chassis. Where the MINI feels feisty straight out of the showroom and the Clio has a menacing edge to its dynamics, the Type R is amazingly sure-footed.

The downside is that there is so much grip available, the Honda needs high speeds to be enjoyed to the full – and that makes it less suitable for fun on the public road.

Still, the Civic scores points with its wide range of skills. Not only will it keep up with its rivals on any road, but it’s also able to tackle long-distance journeys in a far more relaxed manner. Although the Honda’s ride is stiff, it irons out undulations and broken surfaces more easily than either the Clio or the MINI.

And then there’s the practicality Type R buyers benefit from. No matter what you think of the cabin design, the rear seats carry passengers in comfort – and they will have space for plenty of luggage, too. The 485-litre load bay can be expanded to 1,352 litres if you drop the rear seats – a process that’s no more difficult than in the entry-level three-door Civic. There’s also a large stowage area underneath the boot floor.

Both the MINI and Renault are left to feel like one-trick ponies when you consider the Jekyll and Hyde nature and impressive practicality of the Japanese model. Of course, given its size, it comes as no surprise that the Honda is over £4,000 more expensive than the Clio. However, the £19,000 Type R GT is yours for nearly £2,000 less than the MINI JCW.

What’s more, if you don’t want the luxuries fitted to this flagship variant – such as climate and cruise control, plus rain-sensing windscreen wipers – the standard Type R weighs in at a very tempting £18,000.

We admit that it lacks the slap-in-the-face impact of its opponents in this test. But there’s no doubt that the Honda’s abilities and appeal run deep.

Price: £19,000Model tested: Honda Civic Type R GTChart position: 2WHY: Current class champion is as practical as it is exciting. Type R features one of the best engines in the business.

High-quality service comes as standard with every Honda, and the Type R is no exception. Maintenance prices are more costly than with the MINI, but in our Driver Power 2008 reliability and satisfaction survey you rate Honda centres highly. Unfortunately, the temptation to stretch the high-revving engine did our economy no favours. Even over a varied test route we managed only 27.6mpg. CO2 emissions of 215g/km make it a costly company car, too – the 31 per cent grouping is the highest. This should be weighed up against its practicality, however.