Is it white magic for the stripped-out French flier? 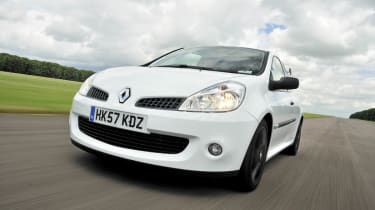 One thing each of our hot hatch trio has in abundance is heritage. The MINI’s history stretches furthest back in time, but there was a big gap from the last of the revered Coopers of the Seventies to the launch of the BMW-built model in 2001 – and so the bloodline of hot Renault Clios looks stronger.

Picking a favourite is a tricky task for any French car fan, and enthusiasts have been reluctant to adopt the 197 into the fold. Still, with its Cup chassis, the latest model must be in the running with the classic Williams and original 172 for the crown of ultimate Clio.

And that’s partly because it subscribes to the low weight, low cost, high performance mantra that’s always underpinned fast Renaults. From the outset, the car has the stance of a street fighter. In white, it makes a feature of its cost-saving black plastic wing mirrors and door handles and matching optional black alloys. The roof-mounted rear spoiler is arguably a modification too far, although the Cup received more attention than either rival during our group test.

Inside, it’s a different story. We love the standard Clio’s cabin, but this car has an utterly forgettable basic black plastic finish. Only the superb bucket seats set the Cup apart as something a bit different...

Test drive it in town or on a busy road, and you’ll take your cheque book elsewhere. The Clio has a jarring stiff set-up, and the ride is the hardest here at low speeds. What’s more, the 2.0-litre engine sounds and feels ordinary when pottering around.

But before you write off the Renault, try it on the open road. It doesn’t have the step in the rev range Civic drivers have to get used to. Instead, acceleration builds in a high-rev crescendo to the near-8,000rpm red line, when the change-up light comes on and the fun begins again in the next ratio. The manic powerplant is identical to that in the standard Clio 197, albeit with revised gearing. Most of the changes come under the skin, where the Cup adopts the tweaks to the platform applied to last year’s R27 special edition.

These make the Renaultsport one of the most accomplished cars in the class. Turn into a corner and it reacts with all the grip and poise of the Civic combined with the playful nature of the MINI.

The Clio only loses ground to its rivals with the finesse of its controls. Not only do the pedals require a firmer shove, the steering feels numb, especially when this car is driven back to back with the JCW. If Renault could improve here, it would have one of the best hot hatches ever built.

And rivals would be holding their heads in their hands if it kept the same price. The standard 197 is a snip at £15,995, but the pared-back Cup is even more tempting, at £14,995. So will it prove irresistible?

Price: £14,995Model tested: Renault Clio 197 CupChart position: 3WHY: Current class champion is as practical as it is exciting. Type R features one of the best engines in the business.

The polar opposite of the MINI, the Clio Cup has a bargain showroom price but will leave a bigger dent in your annual motoring budget. In £14,995 form the Renaultsport model is basic, but even adding desirable extras such as the £850 Recaro seats, £175 black alloy wheels and £150 white paint doesn’t make the Clio particularly pricey. Servicing could prove more costly – the quotes we received for the Cup were the most expensive in this group. While fuel economy was better than the Honda, the Renaultsport’s 29.5mpg couldn’t match the MINI’s.