Japanese four-seater is a refined and sporty rear-drive saloon 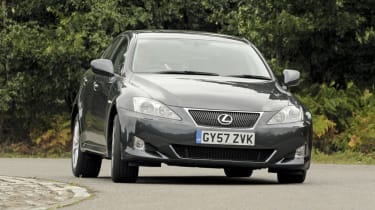 When the original IS arrived in 1999, it came as something of a surprise. With its smart looks, chronograph-style instruments and excellent rear-wheel-drive handling, it was a big hit – and rapidly became the pick for anyone who didn’t want a compact executive from one of the German brands. The latest model arrived in 2006, and it brought significant changes to the formula. The sporty appeal of the original gave way to a more grown-up personality.

From the outside, it looks like a miniature version of its GS stablemate, with swooping curves at the front and a waistline that rises towards a sharply styled rear end. The result is pretty, but ultimately it lacks the drama of the Cadillac.

Getting in couldn’t be simpler thanks to keyless entry, but once on board the size difference between the two cars is obvious. The cosy interior of the Lexus can’t match the CTS for passenger space, although high quality cabin plastics and impressive build come as standard. Top-of-the-range SE-L trim ensures you get just about everything else, including an electric sunblind for the back window, touchscreen sat-nav and a rear parking camera.

Storage space is less generous. The boot is restricted to 378 litres, and a small ski hatch is the only option if you need to carry longer objects. In contrast, the Cadillac has a 562-litre load area, and its rear seatbacks fold forward to make room for bulkier items.

The Cadillac is just as dominant when it comes to outright performance, because the 2.5-litre V6 in the Lexus is outgunned by the bigger, more powerful CTS. From a standing start, the IS reaches 60mph in 7.9 seconds – 1.4 seconds after the Caddy.

The Lexus has a race-style starter button, but its V6 is less sporty, with a muted exhaust note and tamer power delivery. Enthusiastic drivers will prefer the automatic gearbox in the IS, though. Not only is it smooth, but it also anticipates downchanges more instinctively than the slower-shifting Cadillac’s. As a result, you’re less likely to experience an uncomfortable kickdown when you demand more power during a series of corners.

Unfortunately, the latest IS doesn’t have the same sense of urgency or balance as its predecessor, and its compliant suspension and tidy body control make it an efficient drive rather than an engaging one. Mediocre brakes and well weighted but lifeless steering also limit the fun to be had behind the wheel. The Lexus is designed to deliver comfort, and thanks to its refined high-speed ride, hushed cabin and supportive seats, it does just that.

According to our Driver Power survey, it also comes with the back-up of the UK’s leading dealer network and excellent reliability – it feels more solidly built than the big Cadillac throughout. But are such sensible factors enough to see off the US model’s more emotive appeal?

Price: £29,687Model tested: IS250 SE-LChart position: 1WHY: An alternative to more obvious German cars, Lexus is high on many buyers’ wishlists.

Not only is the Lexus cheaper to buy, but it will do a better job of protecting your wallet than the Cadillac. Road tax costs £210 at current levels, compared to £400 in the CTS, and superior fuel economy and better resale values add to its appeal. You also need to consider the Lexus dealer network. It reigns supreme in our annual Driver Power customer satisfaction survey as the best in the business. The firm’s cars rate highly with our readers, too, and cement the IS in place as our favourite. Insurance is another area where owners save – as it doesn’t have the US model’s performance, premiums are much more affordable.