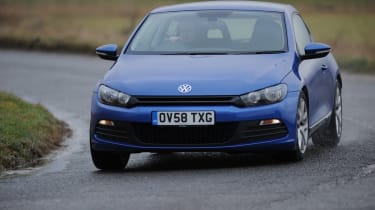 Since it first appeared last year, the Volkswagen Scirocco has just missed out on true greatness. It was narrowly beaten to top coupé honours by the Audi TT (Issue 1,028), while the MINI John Cooper Works edged it out in a hot hatch shoot-out (Issue 1,034).

But now the German manufacturer is ready to fight back with a new entry-level version of its rakish Golf-based model. It’s fitted with the firm’s 1.4-litre TSI engine, which uses a turbo and a supercharger to offer similar performance to larger capacity rivals. Better still, the motor also promises to deliver low running costs.

Visually, there’s nothing to separate this Scirocco from more expensive versions in the line-up. It gets the same gaping lower grille, swept-back headlamps, bulging shoulder line and upright rear. The head-turning looks are completed by a stylish set of multi-spoke 17-inch alloys.

As with the Renault, the Scirocco’s cabin is something of a disappointment after the promise of its distinctive exterior. The dash is lifted from the Eos coupé-cabrio, while the other controls and dials are donated by the Golf. However, the cabin is beautifully built and the materials are all of a high quality. The Scirocco also has the best driving position of our trio, with a wide range of seat and steering adjustment available.

Two individual rear chairs mean the VW is a strict four-seater, although occupants in the back get plenty of head and legroom. But the interior’s biggest drawback is the lack of boot space. The load bay is deep, but in terms of volume, it’s the smallest here. Its 292-litre capacity stretches to 755 litres with the rear seats folded flat – the Volvo can pack in another 255 litres.

The VW also gives away capacity under the bonnet, but that doesn’t stop it turning in a strong straight-line performance. Thanks to the progressive power delivery of its twin-charged engine, the Scirocco overcame the wet conditions to post the quickest 0-60mph time, at 8.1 seconds. Its real-world pace is strong, too, although it can’t match the explosive overtaking urge of the Renault. But where the German car really scores is in its efficiency. Even with hard use, the 1.4-litre unit returned a respectable 32.2mpg at the pumps.

The smaller, lighter powerplant also boosts the Scirocco’s agility over twisting back roads, making the VW the top choice for keen drivers. And it gets the firm’s hi-tech Adaptive Chassis Control dampers as standard. Select Sport mode, and the VW demonstrates great poise and body control in corners, while hitting the Comfort setting softens the dampers for relaxed cruising.

At £18,395, the Scirocco is the most expensive of our contenders, but it counters this with a strong blend of driving fun, performance and good looks. There’s also the bonus of its family car fuel economy and running costs. In fact, we reckon it’s the best Scirocco in the range.

Chart position: 1WHY: Base Scirocco uses a hi-tech engine that mixes performance and efficiency.