The Roomster is easier to live with when powered by Skoda’s larger 1.9-litre diesel, but the packaging is first-class no matter which engine you choose. Add car-like dynamics and a higher-quality cabin, and it is our choice here. 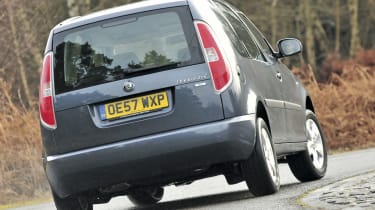 Versatility is what vans do best, so surely a supermini-MPV that has more in common with a car than a commercial model is destined to finish a runner-up here? Or is it? Never underestimate the Roomster!

Skoda’s designers penned an all-new shape for their Fabia-based people carrier, and that allowed them the freedom to give it a unique appearance.

The Czech model’s styling looks as if it was dictated by practicality rather than aesthetics. There’s nothing wrong with the front, which is near identical to the Fabia’s, but further back the car becomes more oddball. While dark paint helps to disguise the Skoda’s unusually high rear windows, children are sure to be more excited by the idea of travelling in the more quirkier Qubo.

Inside, it’s a different story. All the benefits of looking like a top-heavy car from the outside are reaped once you climb into the cabin. While you don’t have the bonus of a high seating position as you do in the Fiat, you feel like you’re driving a conventional hatch – which will be much more familiar for most potential buyers.

The dash is carried over from the Fabia, bringing with it a smart, classy design. All of the Skoda’s switchgear is more substantial than in its rival here – the Roomster could not be accused of having a budget feel.

However, where the showroom appeal really kicks in is in the rear, where you will find plenty of space. Passengers get 730mm of legroom when behind a six-foot driver, which is 50mm more than in the Qubo. With three individual seats you sit nearer to the doors, though, and the centre one is uncomfortable for adults.

Only when you want to take them out do these three chairs pay dividends. Simply fold the backs, lift the squabs and pull a lever, and any or all of the seats can be left at home. They’re not light, but they are much more manageable than the Fiat’s.

In two-seater form, the Skoda has space for 1,780 litres of luggage thanks to its 800mm-long load area. What’s more, the floor is flatter than the Qubo’s. Even as a five-seater, the Roomster’s luggage area is bigger, offering a 450-litre capacity – 120 litres more than in the Fiat. The only downside is that luggage needs to be lifted higher to put it inside. On the road, the Skoda feels much smaller than its rival.

There’s nothing particularly entertaining about the driving experience, with safe and predictable handling both in town and at higher speeds. This car is the more comfortable long-distance companion, however, and seems more closely related to the supermini it’s based on than the Qubo.

Only the engine really lets the Skoda down. Against the clock the Roomster’s buzzing three-cylinder unit offered much stronger acceleration than its four-cylinder rival, yet you have to work it just as hard to keep up with traffic. It’s also very noisy at high revs. That won’t help the Skoda to justify its price premium in this shoot-out, although there’s no doubt it feels classier than the more characterful Qubo.