What Seventies original lacks in power it makes up with character 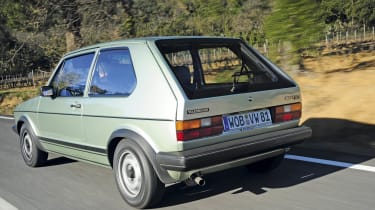 Only a handful of cars deserve legend status, but the Golf GTI MkI is one of them. When it burst on to the scene in 1976, the hot hatch pioneer was an instant hit, putting high-performance driving thrills within reach of the man on the street. And even today, the classic Golf oozes appeal.

Standing next to the MkVI, our 1981 example looks positively tiny. That’s no surprise, because its compact dimensions mean it’s no bigger than the current VW Polo. The boxy MkI was penned by legendary Italian designer Giorgetto Giugiaro, and its crisp lines and creases certainly identify it as a car created in the Seventies.

It’s a world away from the soft curves and flowing lines of the new model, but look closer and you’ll see the two cars share the same bloodline. At the front, the GTI badge proudly adorns the grille, just like the MkVI. The original GTI signals its sporting intentions with a chin spoiler beneath the front bumper, chunky wheelarch extensions and thick black stripes on the door sills.

Climb aboard, and you’ll find the GTI has all the performance car essentials. There is a pair of heavily bolstered seats covered in bright striped fabric, while the driver gets a thin-rimmed, metal-spoked steering wheel. The basic dashboard houses a rev counter, and the gearlever is topped with the trademark pimpled ‘golf ball’ knob.

What’s really surprising is how bright and airy the MkI’s cabin is. This is largely down to its thin pillars and large glass area, and the old stager provides much better visibility than the new car as a result. Twist the ignition key, and the 110bhp 1.6-litre engine takes a moment to burst into life. The normally aspirated unit provides surprisingly strong performance, despite a power deficit of nearly 100bhp compared to its turbocharged counterpart.

The old car tips the scales at 810kg, and it feels energetic on the move, responding keenly to every prod of the throttle. When it was new, the MkI GTI could sprint from 0-60mph in 9.1 seconds, and even now it seems capable of repeating the feat.

But what really impresses is the VW’s agility when you reach a series of challenging corners. There’s plenty of grip, even though the tyres are no wider than you’ll find on a modern city car. And while the unassisted steering is heavy at parking speeds, it’s full of feedback.

Only when you need use the brakes hard does the MkI begin to show its age. They lack ultimate stopping power and ABS was a generation away, so care is needed on slippery surfaces to avoid locking the front wheels. The original GTI also can’t hope to match the refinement of the new car. Even at modest speeds there’s plenty of wind noise, and the characterful engine note always makes its presence felt in the cabin.

None of this detracts from the driving experience, though. While the MkI can’t match the ultimate pace, refinement and usability of the new car, it’s just as engaging to drive and never fails to raise a smile.

WHY: Original GTI created the hot hatch template. We find out if the latest MkVI lives up to the legend.