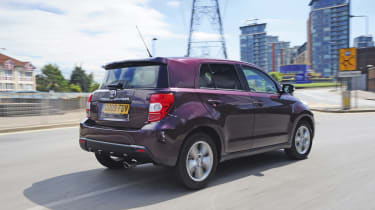 4
With the Aygo, Yaris and iQ in its line-up, Toyota already has a huge small car range. But the Japanese firm clearly thinks there’s room for one more. Designed both to attract new customers and appeal to those downsizing from a RAV4, the Urban Cruiser’s styling has a definite off-road flavour.
The accentuated arches and chunky profile borrow elements from both SUVs and MPVs, yet its looks aren’t as adventurous as the Kia’s and the Toyota can’t compete with the MINI’s retro chic. The newcomer is based on a Yaris platform and stands taller than the Clubman, but it’s shorter, narrower and lower than the Soul. As a result, it has the most conventional looks of the cars here.
Advertisement - Article continues below
Inside, the cabin was designed at Toyota’s design studio in Nice, France, in a bid to meet Western tastes, but it isn’t as attractive as the MINI’s. The cheaper Kia also matches it for quality. The centre console has a metal-effect design, but there’s little to separate the cabin from a normal supermini. In addition, you sit too high and the seats lack support, so the driving position is far from perfect.
Things don’t improve in the back, where a shorter wheelbase than the Kia means its rival is more spacious. Sliding seats which split 60/40 bring some welcome flexibility, but even with them pushed fully back, the Soul provides more legroom. The Korean car also has a bigger boot and the only way to match its load space is to slide the Toyota’s rear seats as far forward as they will go.
Advertisement
Advertisement - Article continues below
There is more standard cabin equipment in the cheaper Kia, too, and while the Toyota is more practical than the MINI, it doesn’t come close to matching the Clubman’s overall interior desirability.
Advertisement - Article continues below
The driving experience is equally disappointing. The 1.3-litre engine has more power than the Clubman’s 1.4 unit, but less torque – and you can feel it on the road, as the Toyota lacks the MINI’s eagerness and has to be worked hard. Despite its lower kerbweight, the Urban Cruiser was more than a second slower from 0-60mph, and less responsive in fifth and sixth gears. Thanks to its six-speed box, it’s more flexible than the five-ratio Kia in gear, but the shift is notchy and uncooperative, while the sudden biting point of the clutch compounds the problem.
The rest of the controls lack feel and are artificially light. The steering provides none of the MINI’s engagement, and while there’s less body roll than in the Kia, the Toyota’s ride is firm. All of which means there’s little enjoyment to be had from behind the wheel.
With a drab cabin and uninspired styling, it’s hard to see how the Urban Cruiser is different enough to be a success in a desirability driven niche segment. Its stop-start system is great around town, but that alone won’t help it win this test.

Chart position: 3WHY: The latest addition to the Japanese firm’s extensive small car line-up is designed to be a hit in the city.