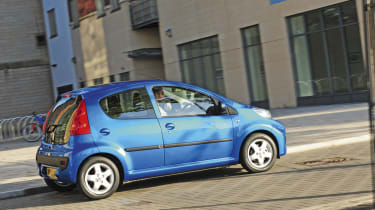 It’s fair to say the tiny Peugeot 107 should excel in this test. With its lightweight build and frugal three-cylinder engine, the French city car has all the right fuel-saving ingredients – and that’s backed up by claimed fuel economy of 62.7mpg. As with our other contenders, the Peugeot doesn’t look like an eco-friendly special. With its bold chrome-trimmed grille, large headlamps and flared wheelarches, the cheeky 107 has considerable kerb appeal. And our special edition Verve test car even featured stylish five-spoke alloy wheels.

Climb aboard and you’ll find a modern and fun cabin. Some of the plastics look a little cheap, but neat touches, such as the eye-catching backlit ventilation controls, pod-mounted rev counter and splashes of body-coloured metal help lift the atmosphere. On top of that, you also benefit from big car features that include electric windows and air-conditioning.

And despite the Peugeot’s diminutive exterior, there’s enough room inside for four adults. The tiny 139-litre boot is disappointing, but its split/fold rear bench folds to free up a useful 751 litres of space. Only the pop-out rear windows and single-piece glass tailgate hint at the 107’s bargain basement status.

However, these lightweight features mean the car tips the scales at only 875kg. Combine this remarkable figure with the car’s eager 68bhp 1.0-litre three-cylinder engine, and the Peugeot feels remarkably brisk on the move. Even on long motorway stretches, the 107 had no trouble keeping up with the more powerful cars in our convoy, although it couldn’t match their refinement.

It’s in the urban jungle that the 107 really hits its stride. Compact dimensions, great visibility, light controls and a composed ride make the Peugeot a pleasure to thread through crowded city streets. Add the tuneful engine note and slick gearshift, and the characterful French car always manages to raise a smile.

However, it was at our final refuelling stop that the Peugeot played its trump card. After brimming its 35-litre tank we hit the calculator and discovered the 107 had returned a remarkable 67.1mpg! Not only was that the best figure recorded by our five contenders, but also 4.4mpg more than the French machine’s official combined consumption.

Characterful and cheap to run, the Peugeot is our economy champ here – but will another of our contenders beat their own claimed economy by an even greater margin?