Budget Korean supermini cuts it as an eco mile muncher 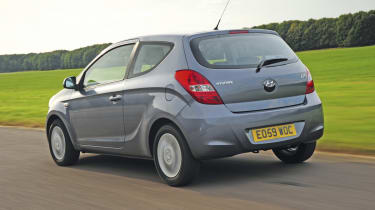 Hyundai doesn’t have a special green brand, but with cars like the i20 diesel in its line-up, it doesn’t really need one. The Korean supermini is already a firm favourite with our team and scooped a commendation at our New Car Awards earlier this year.

It looks uncannily like a Vauxhall Corsa on the outside, but in three-door guise the i20’s distinctive rear side windows also give it the look of a larger Suzuki Swift.

Whatever you think of the car’s styling, the 1.4-litre diesel will make or break its fortunes in this test. It is available in two states of tune, and the less powerful 88bhp unit we tested provides claimed fuel economy of 64.2mpg, the joint highest here.

This impressive figure is even more amazing when you get inside, because the i20 doesn’t want for equipment. Our Comfort-trimmed model came loaded with goodies, including air-conditioning.

The energy-sapping kit was switched off for our economy run, but we could still enjoy another one of its nifty features – the standard iPod adaptor.

On long motorway trips in-car entertainment takes on a much more important role, and being able to operate your plug-in music player using the stereo controls made every stint in the Hyundai one to be relished. The huge amount of adjustment available from the steering column and driver’s seat made it easy for everyone to find a comfortable position, and visibility is first rate. And with a smart multifunction steering wheel part of the standard kit list, driving the supermini was a relaxing experience.

It wasn’t without its faults, though, because evidence of the i20’s bargain £10,650 price is easy to find. For instance, the rear view mirror is flimsily attached and vibrates over coarse surfaces, making for a blurred picture of the road behind. The ride comfort also lacks the smoothness of the class leaders, and its suspension is unsettled by bumpy surfaces and fidgets over imperfections at low speeds.

On our long motorway run we didn’t trouble the gearbox too often, but we were reminded of its cheap rubber lever and the notchy shift action of the Hyundai’s box whenever we hit traffic.

On the whole, though, the i20 proved to be an assured mile-muncher. Its comfortable seats, good driving position and decent high-speed refinement saw it devour the distance, and its torquey diesel engine provides ample performance on both long motorway inclines and crowded city streets.

And at the final fuel stop it showed its true worth, with a return of 65.5mpg on our test route – beating its combined figure of 64.2mpg. With a 45-litre fuel tank, the i20 has a theoretical range of nearly 650 miles. The Peugeot 107 managed 67.1mpg and costs less, but the Hyundai’s extra space and comfort count strongly in its favour. Penny pinching motorists will also appreciate CO2 emissions of 116g/km. As a result, the i20 has a road tax bill of only £35, just like the other cars in our line-up.