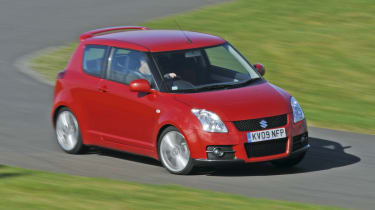 While Suzuki can’t match the hot hatch heritage of Renault, its Swift Sport has been on the market since 2006, and is an established favourite.

It serves up old-school thrills with its simple combination of a zesty engine, stiff suspension and purposeful styling.

Lesser versions of the Swift have aged well, so it forms a solid foundation for a hot hatch. The attractive shape is transformed by the Sport’s 17-inch alloys, twin exhaust tailpipes, colour-coded spoilers and reworked bumpers.

Thanks to a deep chin spoiler and gaping grille, complete with deep-set foglights, the front end has an aggressive look – although it’s far more subtle than the in-your-face Twingo.

Inside, things aren’t quite so successful. While all the correct ingredients are there, the Suzuki doesn’t hit the bull’s eye. We’ve no complaints about the sporty three-spoke leather steering wheel, metal pedals, bright fabrics and aluminium-effect detailing.

But while the sports seats are smart, they don’t provide as much support or comfort as those in the Renault.

However, the Sport is well equipped, with keyless go and climate control fitted as standard. It trails the Twingo by 29 litres on luggage space, but the Suzuki’s 201-litre boot has a split-level function.

The rear seats are slightly more accommodating than those in the Renault, too, although the Swift falls some way short of the Fiesta for practicality.

On the road, the Japanese model has a raucous character. It’s more refined than the Twingo Cup and its suspension is more forgiving. But while the throttle response and steering are sharp, neither can match the immediacy of the Renault. Push hard through tighter corners and the nose loses grip sooner than in the Twingo, too.

The additional weight and softer springs make the Suzuki less involving to drive.

Accelerate hard and the variable valve timing provides a hike in power above 4,500rpm. But it’s accompanied by a rather unpleasant high-pitched note.

While the Sport is slightly better than the Cup on longer trips, both of these cars are tiring companions, due to their low gearing and unforgiving suspension.

You would expect the less focused Fiesta to excel over longer distances, and it does, but the Ford also runs the Swift very close for driving enjoyment.

The Sport isn’t as responsive as the razor-sharp Renault, and only just edged ahead of the Fiesta around our short track.

When it comes to value for money, the Suzuki makes up ground. It’s the best equipped car here, and also has the strongest predicted resale values of our trio.

It isn’t as hard-edged and raw as the Twingo Cup, or as spacious and comfortable as the Fiesta, but the Swift provides a good compromise.

So, does that make it the winner? Or does it get lost in the middle ground?