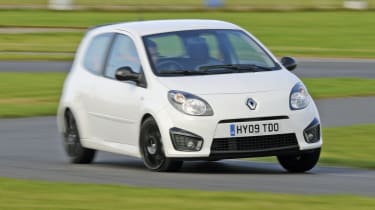 You have to hand it to Renault – it knows a thing or two about hot hatches. Classics such as the 5 Turbo and Clio Williams are long gone, but the brand’s Renaultsport division – which is based in Dieppe in northern France – is on a roll.

The latest Clio 200 Cup excelled in our Performance Car of the Year special, and hot hatch fans are waiting with bated breath for the arrival of the new Mégane 250.

However, for buyers seeking thrills on a tighter budget, the Twingo Cup has the same DNA as its bigger brothers. All the racy styling cues are present and correct.

With extended sills, wider wheelarches and a small roof spoiler, the little city car has developed some muscle, and certainly looks the part. Some people will prefer the more mature lines of the Swift, but if you want your hot hatch to shout about its performance potential, the French car is for you.

It does demand some compromises, though. For starters, the Cup dispenses with air-conditioning, while you also lose the independently sliding rear seats found as standard in other models.

However, even without these there’s just about enough room to carry two adults in the back, plus the boot is bigger than that of the Swift.

Further forward, there’s no escaping the standard Twingo’s bargain origins – the dash plastics are hard and unwelcoming. Overall, the cabin doesn’t feel as robust as its Japanese rival’s, and it’s some way behind the Fiesta in the quality stakes. Thankfully, Renaultsport’s technicians have concentrated on ensuring all the elements the driver interacts with are spot-on. The excellent sports seats are both supportive and comfortable. There’s a lovely chunky leather steering wheel, too, and a smart metal gearknob.

Crucially, despite the tight interior dimensions, the seat and wheel adjust for height, so finding the perfect position is easy. Mind you, comfort is a relative term in this Twingo – the Cup chassis drops the ride height by 4mm and brings 10 per cent stiffer spring rates, as well as tuned dampers.

As a result, you have to endure an extremely firm ride in the Renault – and this can become tiring on longer trips. But find a twisty, open road, and all will be forgiven.

The sharper set-up transforms this city car into a rewarding performance machine. Turn into a corner and the Twingo responds instantly, gripping hard and displaying solid body control.

And while the electronically assisted steering doesn’t serve up the same kind of feel you get in the Fiesta, it’s direct and well weighted. Add strong brakes and a snappy gearshift, and the Cup is a hugely entertaining package.

Pushed to the maximum around the short test track used in our pictures, it feels lighter and more engaging at the limit than the Suzuki.

It logged the fastest time around our circuit, too. As a result of its 10bhp power advantage, the Twingo covered 0-60mph in 8.6 seconds – that’s two-tenths up on the Swift. It also recorded the quickest in-gear responses in our tests.

So this little Renault clearly offers a lot of punch for your pounds. But is that enough for it to overcome its compromises and claim victory in this test?