As superminis appeal to buyers looking to downsize, they need to score on comfort and quality inside. We rate our cars’ cabins. 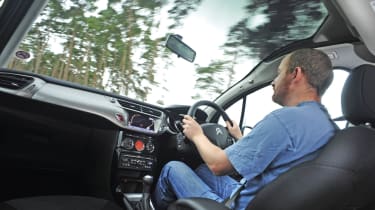 Buying on a budget doesn’t mean you should sacrifice on life’s little luxuries. Take a look around the cabins of our supermini contenders, and you’ll find enough kit to shame a range-topping family hatch. Citroen bosses were keen that the C3’s interior should deliver a premium feel – and on the whole they’ve succeeded.

Climb behind the wheel of the newcomer, and you’re confronted with a sleek-looking dashboard that takes its cues from the C5 family saloon. Our range-topping Exclusive features a mix of piano black trim and chrome to create an upmarket atmosphere.

This luxurious feeling is boosted by the jewel-like switches for the hazard warning flasher and central locking, as well as the elegant dials and soft-touch plastics.

It’s not without fault, though. As with other models in the Citroen line-up, the C3’s stereo controls are small and fiddly, while the window switches on the driver’s door are placed at an awkward angle. It’s still a huge improvement over its predecessor, but it’s not good enough to topple the brilliant Fiesta. With its funky design, solid build and excellent layout, the Ford’s interior is one of the best in the business. From behind the wheel you’ll appreciate the intuitive design of the centre console, which houses controls for the stereo and ventilation.

There’s also a wide range of adjustment for the seat and steering wheel, helping drivers of all sizes to get comfortable. In mid-range Zetec trim, you get ambient lighting that bathes the interior in a warm red glow at night, too. Our only criticism concerns the occasional use of hard and scratchy plastics on the lower half of the dashboard.

You certainly can’t fault the materials found in the cabin of the Polo, which feels like a scaled-down Golf. The fit and finish are excellent, while neat details, such as the classy dials, help create an upmarket air.

However, the all-black trim of our SE test model makes the interior a little gloomy and, as with the exterior, it lacks the design flair of its rivals. As a result, the German car can’t put clean air between itself and the competition. That leaves the Renault and SEAT fighting it out. The Spanish model has a lot going for it, thanks mainly to its bold dash styling. It also benefits from a low-slung driving position, a chunky three-spoke steering wheel and some bright trim colours.

Sadly, the Ibiza is let down by cheap-feeling plastics. The soft-touch material used to cover the top of the dash is attractive, but elsewhere the plastics are hard. Our test car also suffered from the odd creak – probably a result of its firmer suspension. So, it trails the Clio here. Inside, the Renault hides its years well, with an uncluttered dashboard layout and some impressive, solid construction.

Large windows help create a bright and airy atmosphere, and make the Clio easy to place when parking. Only the upright driving position is a letdown – reach adjustment for the steering is only available with the £300 keyless entry system.

Ratings:Ford Fiesta: 5/5 Eye-catching design and solid build secure the spoils for the Ford here. It also has a great driving position.Citroen C3: 4/5 Owners of previous C3 will be impressed by new car’s comfortable seats, classy materials and stylish dash. VW Polo: 4/5 As you’d expect, the Polo has a high-quality cabin. It’s short on flair, but is logically laid out and beautifully built.Renault Clio: 4/5 The Clio’s dashboard is attractively styled, the plastics are surprisingly robust and visibility is good. SEAT ibiza: 3/5 While the interior design is modern, Ibiza can’t match rivals for quality. Some materials look and feel cheap.