We got out our tape measures to see which contender is the roomiest and most practical. 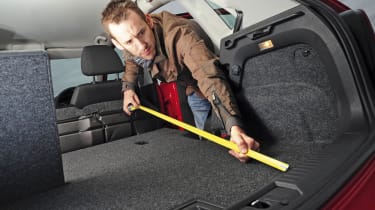 Despite their compact exterior dimensions, superminis are called on to carry everything from the weekly shop to holiday baggage. That means designers have to come up with some extremely clever packaging. Take a look at the measurements in our Data Bank (Page 50), and you’ll see that all five models are closely matched. So, which one wins the space race?

Considering the Citroen’s tall stance and large windscreen, we weren’t surprised to find that it felt the most spacious car here – particularly when it comes to headroom. The cabin will take five adults at a squeeze. Less impressive is the limited amount of stowage space inside.

The door pockets are small, and Citroen doesn’t move the fuse box in the conversion from left to right-hand drive. This means it gets in the way of the glovebox, and seriously compromises space.

On the plus side, when you open the tailgate you get a class-leading 300 litres of load space – five litres more than in the Fiesta. Drop the split-fold rear bench, and capacity rises to a healthy 1,000 litres – only the Clio can beat that. The sole black mark is a high load lip, so lifting in heavy items can be tricky.

While the Polo lags behind the C3 in terms of outright space, it easily matches its French rival for versatility. Occupants in the rear get slightly less legroom than in the Ford and Citroen, while the high window line and dark trim make the cabin feel more claustrophobic.

However, there’s loads of space for oddments, thanks to its huge front door bins. On paper, the VW’s 280-litre boot is the smallest here, but capacity can be increased by dropping the simple false boot floor into its lowest setting. The lightweight panel can easily be removed or angled upwards to aid access to the area beneath. It also provides a totally flat load area when the rear bench is stowed, which is unique here. Plus, the VW is the only model to have a 12V power socket in the luggage compartment.

In contrast, the Fiesta is much more simple and relies on pure volume. With the seats in place, its boot offers a 295-litre capacity – the second largest in this test.

Look elsewhere and the Ford fares even better, with rear passengers getting as much room as those in the spacious Citroen. Plus, up front you’ll find huge door bins, a deep tray running between the seats and a big glovebox.

Given that it’s based on the same platform as the Polo, the Ibiza was always going to have just as much room as its VW cousin. But the 292-litre load bay doesn’t get the same neat two-level floor and the catches for lowering the rear seats are stiff to operate.

Switch to the Renault, and the lower window line  makes the interior feel brighter than all bar the Citroen’s. The biggest criticism we can level against the Clio is the shortage of stowage. Owners have to put up with narrow door bins, a cubby at the base of the centre console and only a pair of cup-holders.

Nevertheless, the boot is well proportioned, and when you drop the rear bench, the capacity increases to 1,028 litres – making the Renault the most spacious car here. The only fly in the ointment is the large floor-mounted cross brace.

This means that the load area is not completely flat when the seats are folded. With the margins between the cars so small here, it’s four stars across the board for all of our supermini contenders.

Ratings:Citroen C3: 4/5 Thanks to a class-leading boot and spacious interior, the C3 is a practical choice. The tiny glovebox is laughable, though. VW Polo: 4/5 While it’s not the biggest car on test, the Polo is well thought out. It features a simple false boot floor and rear seatbases which tilt.Ford Fiesta: 4/5 With the second biggest boot and plenty of legroom for passengers, the Fiesta is  versatile. It has plenty of oddment stowage, too.SEAT Ibiza: 4/5 As it shares underpinnings with the Polo, the SEAT is a close match – although it lacks the Volkswagen’s false floor set-up.Renault Clio: 4/5 Clio scores with its large 288-litre boot, and when the seats are down, 1,021-litre capacity is the biggest on test. Narrow door pockets limit interior cubby space.