Citroen is renowned for its cutting-edge design, but is the brave new C3 a more attractive choice than its competitors? 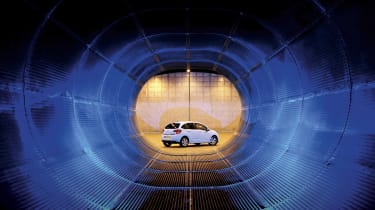 Just because you’re buying a supermini, you don’t have to compromise on style. In fact, the trend for downsizing means these small machines are now very fashionable. And this is where Citroen hopes its new C3 will shine.

The French firm has built a reputation for eye-catching design, with models such as the luxurious C6 and quirky C3 Picasso leading the way.

There’s no denying the newcomer stands out from the crowd, particularly when parked next to its lower-slung rivals here. In profile, it has the same upright shape as its predecessor, while the gaping grille and swept-back headlamps provide a strong family appearance. Yet the most head-turning aspect of the C3 is its huge panoramic screen, which stretches 1.35 metres from the base of the dash to the middle of the roof.

This is standard on the VTR+ and Exclusive, but can’t hide the C3’s ungainly shape. The mix of curved and straight lines and fussy details, such as the boomerang-shape tail-lights, leaves the Citroen behind the Ford and SEAT in terms of styling.

More than a year after it first made its debut, the Fiesta still looks fresh and stylish. A combination of rakish lines, perfectly judged proportions and neat detailing gives it the edge over its rivals here. All this helps to provide the look of a premium product. Our Zetec model is enhanced by standard-fit multi-spoke alloys and subtle chrome-effect highlights for the window surround and tailgate handle.

Younger buyers are likely to love the sporty style of the Ibiza. An aggressive nose and heavily sculpted flanks help give the Spanish machine real kerbside appeal. Look closely and you’ll spot some clever touches, such as the large SEAT tailgate badge that doubles as a boot release.

The Polo shares this detail, although that isn’t enough to stop it finishing in the pack. For some buyers, of course, the VW’s desirable badge and rock-solid image will be all that matters.

In isolation, the scaled-down Golf styling gives a real sense of class, but park it next to our top three, and we think the Polo’s conservative lines appear bland. Also struggling to compete in this section of our test is the Clio. It is the oldest car here, and while a facelift earlier this year was designed to freshen up its slightly dated looks, we don’t think this has been successful.

In particular, the bulbous new nose isn’t as attractive as the pert shape of the previous car. Overall, the Renault isn’t offensive, but it won’t exactly set pulses racing, either.

Ratings:Ford Fiesta: 5/5 Rakish lines and beautiful detailing – both inside and out – help to give the Fiesta an edge here. All of our testers put Ford’s supermini first when it comes to looks.

seat Ibiza: 4/5 Buyers wanting a sporty image are guaranteed to be won over by the latest Ibiza. Junior hot hatch looks and optional 17-inch alloys (£137) provide real road presence.Citroen C3: 3/5 While the new C3’s styling is certainly distinctive, some heavy-handed detailing and an upright stance do it few favours. Its quirky design can’t match class best. VW Polo: 3/5 Few rivals can beat the premium appeal and solid build of the VW. But even a strong image isn’t enough to offset the Polo’s bland and conservative lines.Renault Clio: 3/5 The Clio is the oldest of our contenders – and it’s now starting to show. Sadly, a clumsy mid-life refresh has done little to help the four-year-old model’s cause.