Despite their budget prices, our quartet still pack in a huge amount of kit 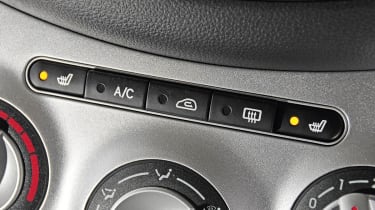 You don’t expect city models to offer loads of kit, but the competitive nature of the small car market means it’s not unusual to see sophisticated equipment on the options list, or even on the dash as standard.

The centre console on the new Chevrolet Spark includes automatic climate control, with a neat digital display screen. It also gets a quality hi-fi system, that’s only let down by the aftermarket look of the speakers on top of the dashboard. And at night, the blue backlighting offers an expensive look. But while the motorbike-inspired information pod on top of the steering column is eye-catching, the quality of the materials used feels cheap, and the controls are hard to reach.

Low-grade materials are also evident on the wheel, gearlever and door trim. On the plus side, the flagship LT model does have six airbags and Isofix child seat mountings as standard. Air-conditioning is manually controlled in the Hyundai, but it also gets a sunroof and heated seats as standard. The latter are especially impressive for a car in this price bracket, and are unique in this test.

Interior styling in the i10 could be more exciting, but everything is well laid out and logically placed. In terms of quality, the Hyundai’s cabin is the best here, with each switch and control well weighted. Its leather steering wheel also has a classy feel. Put simply, you could be forgiven for thinking you were sitting in a car costing a lot more.

That’s not a mistake you’ll make in the Alto, which uses low-grade materials inside and falls short on style. Everything seems well screwed together, but the finish is poor. Particularly  disappointing is the centre console, with its haphazard buttons and dated design.

Pop-out rear windows and a lidless glovebox are further examples of cost saving. But as with the Chevy, the little Suzuki does manage to squeeze in six airbags, and both models have stability control as standard.

The Aygo makes do without some useful kit inside – it’s the sole model on test without a rev counter – but elsewhere, the flagship Platinum variant has some really grown-up features. The seats are finished in leather and Alcantara, and it’s also the only one of our quartet with Bluetooth connectivity and metallic paint as standard.

As with the Hyundai, the Aygo gets only four airbags, and even air-conditioning is an expensive option (at £501). So when it comes to equipment, the tiny Toyota proves to be something of a mixed bag.

Results Hyundai - 4/5 The i10 is well equipped. Our Style model features heated seats as standard – this isn’t even an option on the other cars. It also has a trio of three-point belts in the rear. But the Hyundai comes with only four airbags and, as with the Aygo, stability control is a costly extra.

Suzuki - 4/5 Although it carries a low list price, the Alto certainly doesn’t disgrace itself in the standard kit department. The Suzuki includes stability control, and it also has six airbags. Yet the quality of the dashboard and other fittings isn’t quite a match for its competitors here.

Chevrolet - 4/5 As it has the highest price, at £9,845, you’d expect the Spark to come loaded with equipment as standard. And it doesn’t disappoint. You get six airbags, climate control and a decent-quality stereo, while stability control is also included, enhancing the car’s safety credentials.

Toyota - 3/5 Even though Platinum trim is the most luxurious in the Aygo range, we think it struggles to offer the amount of equipment now expected in this sector. There are only four airbags, and air-conditioning is an option. However, Toyota does get Alcantara and leather seats and standard fit Bluetooth.