Revealed: The small car that has highest-quality finish – and makes best use of its limited space. 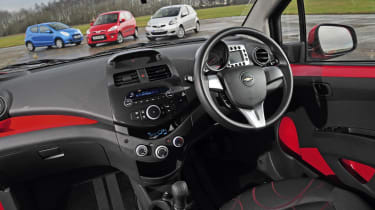 Good things come in small packages, but these cars have to punch above their weight – and the ability to cram lots of gear into their tiny cabins is the key to success here. When you open the door to the Aygo, it’s clearly the smallest choice. The Toyota is the shortest model overall, while its wheelbase isn’t as long as its rivals’, either – and this translates to the least accommodating cabin. There is ample room up front, but rear passengers are left without space to stretch their legs out in, plus headroom is tight.

Unlike the Spark and i10, the Aygo’s rear bench is suitable only for two occupants, and the boot has a miserly capacity of 139 litres. Plus, while the translucent plastics and bright buttons inside are fine on cheaper models, they look out of place on the £9,841 Platinum version.

The design is attractive and fresh, with the big dial for the white-faced speedometer directly in front of the driver. However, the Toyota is the only car not to feature a rev counter. It’s a £153 option. You can’t miss this dial in the Alto – it sits in its own dash-top pod. And while it feels like an afterthought, it’s an attempt to inject some sporting flair.

Elsewhere, though, it’s easy to see where Suzuki has tightened the purse strings. The plastics feel rough, the glovebox does without a lid and the centre console looks dated. The seats are comfortable, and while it can’t match the Chevrolet or Hyundai for rear passenger room, the Suzuki makes a decent job of carrying four in relative comfort. But if you were disappointed by the Aygo’s boot, wait until you lift the Alto’s tailgate – the 129-litre space has nearly 100 litres less than the i10.

The Chevrolet can’t match the Hyundai for luggage room, either – its 170-litre load bay trails the Korean car’s 225 litres – but there is ample room in the back seats. The driving environment also feels spacious and well thought out. However, there’s no reach adjustment for the steering wheel, and we found the gearlever awkwardly placed – so it was quite difficult to get comfortable behind the wheel.

That’s a pity, because with its red flashes, pod-like instruments and classy centre console, the dash of our range-topping Spark looks interesting – even if it can’t match the quality of the Hyundai. There is ample leg and headroom in the back of the Chevy, but it feels a bit claustrophobic. This is mainly due to the heavy-handed design of the external door handles – hidden in the frames – which block out a lot of light.

Whether you’re sitting in the cabin or loading luggage into the boot, you can’t beat the i10 for space. Up front, the heated seats are supportive and comfortable, with a good range of adjustment. There are also five three-point seatbelts, as in the Spark, and thanks to the tall roofline you get plenty of headroom, too.

Usefully, the back seats are split 60:40, and if you fold them you free up 910 litres of space. A large tailgate and low loading lip make accessing this easy – so the i10 is our practicality champion.

Results Hyundai - 5/5 By far the best quality on test is provided by the i10, with soft-touch plastics and comfortable heated seats as standard. Silver-effect plastic trim and white speedo add a racy touch, while large boot and roomy cabin mean the i10 is the most practical car.

Toyota - 3/5 As a bargain basement model, the Aygo makes a lot of sense – but it’s left trailing in this company by its slightly cheap plastics and basic design. It’s also the smallest contender; this shows on the inside, for passengers and luggage alike.

Chevrolet - 3/5 The Spark’s layout must have looked great on the designers’ sketchpad, yet it’s fussy, and let down by lacklustre materials. Still, there’s plenty of room for occupants and their baggage.

Suzuki - 3/5 As with the exterior, the Alto’s interior has clearly been built to a price, with poor quality plastics and a haphazard layout. The rev counter pod is intended to add some sporting flair, but looks out of place against the rest of the dated interior.