You expect nimble handling from a city car – so we pick the most agile. 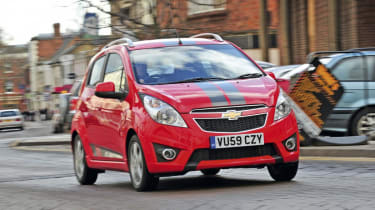 Each of our four cars weighs less than 1,010kg, so they all feel nimble on their feet. Lightest of all is the Toyota, at 800kg. Its three-cylinder engine produces only 67bhp, but thanks to its flyweight design, it provides sharp handling.

As a result, the Aygo is the most rewarding car to drive, even if the acceleration figures suggest otherwise. The steering wheel offers plenty of feedback and the slick-shifting gearbox is a pleasure to use – something you have to do frequently to get the best from the revvy engine. And whether you’re around town or on the open road, the ride remains composed and the handling neat and nimble.

There’s little to criticise, with the exception of a buzzy exhaust note, so if you’re after a fun drive, this is the model to choose. The only other three-cylinder model in our line-up is the Suzuki Alto. As with the Toyota, it has a willing and rev-hungry engine, but our car had a curious vibration at idle and under load, which ruined the experience.

Against the clock, the little Suzuki proved disappointing, with the slowest acceleration figures and worst braking results. And while the gearbox has a short throw, it occasionally proved reluctant to engage the next ratio cleanly. However, the Alto did prove one of the quietest and most economical cars. On paper, it looks as if the Spark should have the upper hand. Its 1.2-litre unit produces 80bhp at 6,400rpm – the most on test. But as peak torque is also delivered high in the rev range, you have to work it hard, where it becomes vocal and harsh – it’s not an area the engine, or your ears, will relish.

In town, the Spark feels eager, although higher speeds reveal its lack of low-down torque. Braking isn’t much better, and the Chevy posted the worst figures on our damp track – it took 60.3 metres to stop from 70mph, which is 3.9 metres more than the i10. Minimal feedback is offered by the steering, which didn’t inspire confidence at speed.

The Hyundai delivers a much more accomplished drive. Only around town does the Korean model struggle – the suspension gets upset by minor surface imperfections, which results in a fidgety ride.

Apart from this, there’s not a lot to complain about. The torquey engine is more than powerful enough to keep up with traffic, and the Hyundai posted the best performance at the track.

The i10’s small wheels and tall body suggest it will have difficulty in corners, but its chassis is surprisingly capable, and the car grips well. Owners will also appreciate the light controls, direct steering and snappy gearchange in the cut and thrust of urban driving.

Results Hyundai - 5/5 With 118Nm of torque, the i10 was quickest against the clock at our test track, sprinting from 0-60mph in 11.6 seconds. A grippy chassis, direct steering and a slick gearbox bolster the experience. Our sole criticism is the fidgety low-speed ride.

Toyota - 4/5 The three-cylinder Aygo’s tiny kerbweight means it is exceptionally light on its feet. The steering offers lots of feedback and the gearbox is smooth. Whether accelerating, cornering or braking, the Toyota feels the most eager of the four cars in this group.

Suzuki - 3/5 Three-cylinder Alto is the least powerful model here, but the engine is willing and likes to be revved. It was also one of the quietest and most economical on test. However, our car had a nasty vibration, especially at idle, and the brakes felt poor. And while the low-speed ride is good, refinement on the motorway could be better.

Chevrolet - 2/5 It produces the most power of our test quartet, but the Spark probably has the least impressive engine – you have to work it hard to extract the performance, which is where it becomes noisy and unrefined. Around town, the light controls make it easy to drive, although the steering lacks feedback.