Diesel power arrives under the bonnet of sporty supermini. Will it propel the Spanish flier to victory? 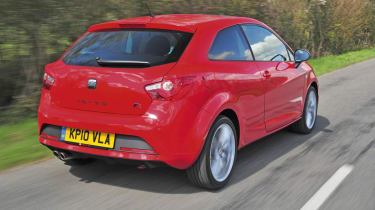 If one car maker has forged a reputation as a producer of high-performance family-friendly models, it has to be SEAT. The FR TDI is the biggest selling version of the larger Leon hatchback, and the Ibiza supermini range includes hot FR, Cupra and Bocanegra models.

The FR TDI does without the distinctive black face of the petrol flagship, yet still looks the part. Slanted headlamps and angular lines are part of the regular SC package, but the FR gets a set of 17-inch alloys, twin exhausts, silver door mirrors and a honeycomb grille to help it stand out. And unlike the Alfa, the SEAT is also available in more practical five-door guise for an extra £410.

On the inside, the Ibiza’s cabin lacks the immediate drama of the MiTo, but the matt finishes and neat design are appealing, while material quality and kit levels are high. You grip a handsome leather steering wheel and gearlever, plus climate control is fitted as standard.

Neat FR logos adorn the dials and sports seats, but the instruments look a touch ordinary for such a sporty model, and the radio is fiddly to operate – a common complaint with the Ibiza range. Rear seat space is broadly similar to its rival, but you get three belts across the back and the FR benefits from a split-folding set-up. The MiTo, on the other hand, only has room for two and a one-piece rear bench.

Open the tailgate with the trademark SEAT badge boot release, and the Ibiza holds sway over its rival at the back, too. Its 284-litre load area shades the 270-litre MiTo for outright space, and the load lip is lower, too.

But practical concerns won’t be what separates these two, because they live and die by their performance, handling and economy. And it’s here that the SEAT comes into its own. Its 141bhp 2.0-litre TDI has a six bhp advantage over the Alfa, and when it comes to torque, it leaves its rival trailing, as an output of 320Nm trumps the 206Nm of the MiTo.

At the test track, this provided predictable results, as the SEAT was faster in every measurement, sprinting from 0-60mph in 8.5 seconds and 50-70mph in fifth gear in 7.9 seconds. The MiTo completed both in 8.9 seconds. Leave the track behind, and the gap is much closer, with little to choose between them on the road. However, the big difference is in the way they deliver their performance.

The FR’s smooth common-rail diesel pulls strongly from low revs, and acceleration doesn’t tail off until you get within 500rpm of the red line. Traction is impressive, too, thanks to the FR’s electronic XDS differential, while the SEAT’s front tyres grip harder than the MiTo’s.

Find a sequence of bends, and the Ibiza comes into its own. Its specially tuned suspension is firm, but well judged damping ensures comfort is good by hot hatch standards. The SEAT turns into bends precisely and its composure over mid-corner bumps is impressive. There’s more feedback from the steering than in the Alfa, and the Ibiza’s stability under heavy braking is in direct contrast to the unsettled attitude of the MiTo.

Rounding off the dynamic package is the Spanish car’s six-speed gearbox, which is much more positive than its rival’s five-speed transmission. So, while the Alfa can stay in touch with the SEAT over typical British B-roads, the Ibiza is more enjoyable, and you don’t have to work as hard to keep up the pace. The SEAT is also more accomplished around town, but does it triumph where it matters for a diesel hot hatch – at the pumps?

A final brim of the tank after a hard day of road and track driving revealed fuel economy of 33.1mpg. That figure is some way short of the firm’s combined claim of 60.1mpg, but was par for the course after our short and unforgiving trip. And it’s easy to imagine realistic returns of 50mpg plus.

You would expect the diesel to be much cleaner than its petrol rival, and the SEAT doesn’t disappoint. However, the margin of victory is small and the two cars are closely matched when it comes to CO2 emissions.

Private buyers will pay the same price for an annual tax disc on either car, but the Ibiza’s slender advantage doesn’t help business users as the diesel SEAT has a higher company car banding than its rival and costs more as a result.

The latest hot SEAT is exactly what we’ve come to expect from the brand. It’s faster, more capable and less thirsty than the Alfa, but will that be enough to overcome its charismatic petrol rival?

Chart position: 1WHY: Hot diesels are nothing new, but the latest Ibiza FR features 141bhp and a six-speed manual gearbox – plus claimed economy of 60.1mpg.