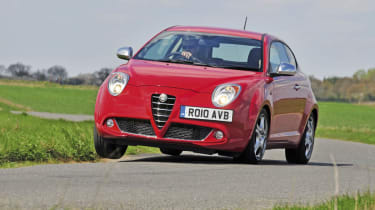 The Alfa is unlikely to match the SEAT for pure economy, so it needs to outscore its rival in other areas to register a victory here. And it gets off to a good start, because the MiTo looks pretty special out on the street.

Its trademark grille, offset number plate and circular rear lights make it instantly recognisable from just about any angle. There’s no need for the extra styling kit added to the Ibiza FR, as there are no budget priced models to diminish its appeal. Put simply, the Alfa looks more exclusive than its Spanish rival.

The cabin maintains that impression with a bespoke look. The racy details extend to the instruments with the water temperature and fuel gauges identified using evocative Italian script – labelled ‘aqua’ and ‘benzina’ respectively.

Standard kit is reasonable, with Bluetooth connectivity included, but the MiTo doesn’t feel as solid as the SEAT, and our test car’s integrated sat-nav is a costly £1,350 extra. Digital climate control adds £360, while cruise control costs £200, so the Italian car’s price advantage disappears when you take specification into account.

The single-piece rear bench seat also smacks of cost cutting. It isn’t as practical as the split folding set-up of the Ibiza, and the painted metal seatback is likely to get scratched in everyday use.

Alfas have always been more about emotional appeal than versatility, though, so does the MiTo stir the soul? Twist the key in the ignition, and the 1.4-litre engine fires into life. Alfa claims its new MultiAir technology will be as significant to petrol engines as common rail has been to diesels.

Its hydro-electric air intake system allows precise control of combustion, boosting low-down torque, cutting emissions and improving economy. It’s effective, too, with peak torque produced at 1,750rpm – the same as the diesel Ibiza. However, with 206Nm the Alfa has a 114Nm disadvantage, which forces you to work the willing powerplant hard to keep pace with its faster rival.

This is actually a key aspect when driving a hot hatch, and the free-revving engine and lively soundtrack form the basis of the MiTo’s appeal. It lacks both the power and punch of its rival, but the Alfa is only fractionally slower on the road.

However, the driving experience is compromised by a host of dynamic flaws, beginning with the imprecise five-speed gearbox, which is easier to use if you slow your shifts. The switchable DNA system fails to improve matters, either. In Normal mode the throttle response is blunted, so you invariably select the Dynamic setting before driving off. This cures the problem, but ruins the steering, by adding too much weight to the elastic and artificial set-up.

Whichever setting you choose, there’s no escaping the MiTo’s suspension, which struggles to cope with typical British backroads. It’s unsettled by even small undulations, and mid-corner bumps throw it off course, so you’re forced to make constant steering adjustments to maintain your line.

This lack of composure in bends is mirrored under heavy braking. What’s more, at the end of our test the MiTo had averaged only 25.4mpg, which leaves it with lots of ground to make up.