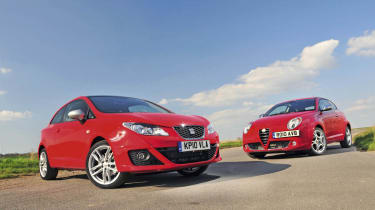 What flavour do you prefer for your hot hatch thrills: petrol or diesel? Driving purists usually opt for the former, but when it comes to low-down torque and economy, diesel models take pole position every time.

The latest to hit the streets is the SEAT Ibiza FR TDI. With a 141bhp 2.0-litre diesel, it’s not short of power, and CO2 emissions of 123g/km combine with economy of 60.1mpg to ensure it’s cost-effective, too. The icing on the cake is its gearbox, because unlike hot petrol Ibizas, the FR TDI is only available with a six-speed manual, rather than the twin-clutch DSG system.

Hot hatches started out with petrol engines, though, and the latest units are cleaner and more powerful than ever. Here to represent the old guard is Alfa’s MiTo. It’s available with the firm’s MultiAir engines, which claim to provide improved power with lower emissions and fuel consumption. We put the Ibiza up against the 135bhp 1.4-litre MiTo in flagship Veloce trim.

Our duo are closely matched on price, power and emissions – but which one provides more hot hatch thrills for the money?

On paper this should have been a closely fought contest, but on the road it was anything but. We fully expected the diesel SEAT to be cleaner and more efficient than the petrol Alfa, but the Ibiza was also faster, quieter, smoother and more practical than its rival.

The MiTo is a flawed machine. Without the adjustable suspension of the Cloverleaf flagship, its jittery ride is irritating and detracts from the driving experience. The Alfa looks great and has a terrific engine, but it’s let down by its restless road manners.

The SEAT is composed, refined and enjoyable to drive. It can’t match the visual drama of the MiTo, the charismatic feel of its cabin or its free revving nature, but in all other respects, the Alfa is found wanting.

The Ibiza isn’t the car you’d buy if your heart was making the decision, but use your head and it’s a clear winner.