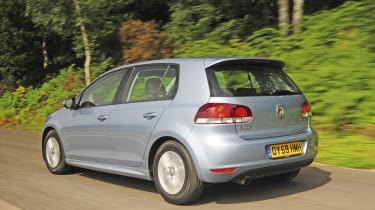 Not many manufacturers can match Volkswagen’s eco credentials. The BlueMotion sub-brand has given the firm an impressive range of fuel-sipping models in virtually every sector of the new car market, from superminis to SUVs.

A recent addition to the BlueMotion line-up is the Golf MkVI. It arrived in showrooms here earlier this year, and already has an enviable track record, having beaten the Ford Focus ECOnetic and Toyota Prius in a straight fight.

Unlike the advanced Auris HSD, the VW uses tried-and-tested diesel technology to achieve impressive reductions in CO2 emissions and fuel use.

As with its rival, though, you’ll struggle to identify it as an eco-friendly model when it’s parked at the kerbside.

A casual inspection reveals the same sober and impressively executed lines that give any Golf its desirable aura of understated class. Only eagle-eyed motorists will notice the subtle bodykit and lower ride height, both of which are designed to reduce aerodynamic drag.

It’s a similar story inside, where the BlueMotion could easily be mistaken for a standard model. The interior’s fit and finish are first rate, easily putting models from the class above to shame – let alone the Auris.

This helps to give the car a genuinely upmarket feel.

You don’t get a lot of standard equipment, but essentials such as air-con and electric windows are included. Plus, the classy leather- trimmed steering wheel fitted to our test car is a worthwhile £120 option. There’s plenty of space inside and a big glovebox, while deep door bins add to the family-friendly appeal. Swing open the tailgate and you’ll reveal a healthy 350-litre load bay, which stretches to a generous 1,305 litres with the rear bench folded flat.

At the other end of the car is a traditional 1.6-litre diesel engine. Tuned and tweaked for economy, the common-rail unit delivers 104bhp – which is 30bhp less than the combined petrol-electric might of the Auris. Even so, the VW was marginally quicker than the Toyota at the test track, and in the real world the Golf feels faster still. With a healthy 250Nm of torque at 1,500rpm, it delivers a strong surge of acceleration from surprisingly low speeds.

Performance at the pumps is more important to these cars – and although the 43.9mpg the BlueMotion returned in our hands is well short of VW’s claimed 74.3mpg, it trumped the Toyota’s economy by 2.5mpg. This looks even more impressive when you consider it includes high-speed testing. Unlike its opponent here, the VW’s fuel-saving measures demand no compromises in the driving experience. On the move, the car feels like any other model in the Golf line-up – which means excellent refinement, perfectly weighted controls and a composed, agile chassis.

Chart position: 1WHY: This eco-friendly diesel takes some beating, thanks to its strong green credentials.