Firm fits hybrid drivetrain in familiar package to broaden its appeal. Has it succeeded? 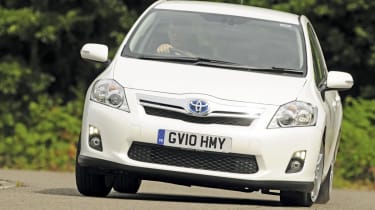 THINK of an eco-friendly hybrid, and chances are a Toyota will spring to mind. The ambitious Japanese manufacturer has been at the cutting edge of petrol-electric technology ever since it unveiled its first Prius more than a decade ago.

The car’s quirky looks, celebrity owners and exemption from the London Congestion Charge have all helped to raise the brand’s eco-friendly profile. However, despite a string of Hollywood endorsements, the hatchback has been only a minor sales success in the UK, with around 7,000 finding homes last year. And while there are a greater number of buyers queuing up in 2010, bosses are keen to broaden the appeal of their hi-tech powerplant.

As a result, engineers have squeezed the Prius’ Hybrid Synergy Drive (HSD) mechanicals into the firm’s conventional Auris family hatchback. With its familiar looks and cabin, the newcomer is charged with tempting buyers away from mainstream oil-burners.

On paper, the Toyota has what it takes to attract people looking for a clean, green machine. Boasting 74.3mpg and CO2 emissions of only 89g/km, the HSD is more than a match for most traditional diesels. Better still, the Auris’ styling won’t divide opinion in the same way as the Prius’ does – although it’s unlikely to send buyers weak at the knees with desire, either. At a glance it looks like all its stablemates, which means well proportioned but slightly bland lines. Up close, you’ll spot the unique blue-backed Toyota logos, LED driving lights and discreet HSD badges.

The car in our pictures is a top-spec T Spirit, which is marked out by 17-inch alloys. These aren’t as aerodynamically efficient as the 15-inch steel rims with plastic trims worn by our entry-level T4 test model, and they push CO2 emissions up 4g/km to 93g/km. Climb aboard and you’ll find the cabin is near-identical to other Auris models. There’s the same logically laid-out dash, eye-catching raised centre console and solid finish. The only clues to its hybrid powertrain are a stubby Prius-style gearlever and a set of distinctive blue-backlit dials that includes a power gauge instead of a rev counter. This shows whether the electric motor is boosting performance or charging the battery via regenerative braking.

While the interior can’t match the classy, upmarket feel of the Golf, it is spacious and practical. Highlights include the deep double glovebox, and a flat rear floor which gives occupants plenty of room for their feet.

Only the luggage compartment is disappointing, as the battery pack for the electric motor is mounted beneath the boot floor, reducing carrying capacity to 279 litres – that’s 71 litres less than the VW’s.

While the HSD’s looks and cabin are entirely conventional, the driving experience is anything but. Hit the starter button and nothing appears to happen, but squeeze the throttle gently and the car moves silently away. Toyota claims that the newcomer will travel more than a mile on electric power alone, although in reality the 1.8-litre petrol engine will kick in to assist acceleration long before that distance. As with the Prius, it has a CVT gearbox, which delivers smooth progress thanks to its shift-free running, although it does hold engine revs intrusively high when you accelerate quickly.

At the track our two contenders were evenly matched, with the Auris only two-tenths slower than the VW in the 0-60mph sprint, with a time of 11 seconds exactly. T

o eke the best economy out of the hybrid on the road you need to constantly study the power gauge, and maximise use of the torquey electric motor. It requires a change in driving style and delicate use of the throttle, but the results can be effective.

Everything else about the HSD driving experience is standard Auris. The steering is light and direct, and grip in corners is impressive. The stiff ride disappoints, as potholes can shudder through the cabin, while the brakes require a sensitive touch if you want to stop smoothly. But the question is whether Toyota has done enough with its latest hybrid to attract owners of conventional machines. There’s no denying the promise of low CO2 emissions and free road tax will tempt many, while our fuel return of 41.4mpg trailed the VW by only 2.5mpg.

However, the change of driving style required to extract the best economy from the Auris won’t please everyone, and the car itself trails many class rivals for styling and desirability.

This is the most rounded petrol-electric Toyota yet, but It’s not without its flaws. Will these prove decisive against the traditional appeal of the Golf?

Chart position: 2WHY: By squeezing a hybrid into the Auris, Toyota hopes to tempt buyers away from diesel hatches.