Established seven-seater is stylish and spacious. But is it still good enough to beat Chevrolet's newcomer? 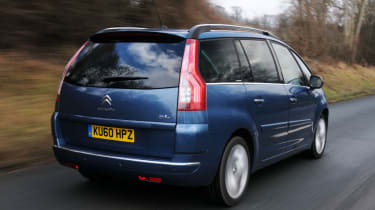 In 2007, we voted the Grand C4 Picasso our favourite MPV. Since then, a raft of newcomers has raised the game in the sector, but recent revisions to the Citroen mean it’s now better than ever.

There wasn’t much wrong with the way the old car looked, and the latest model is just as appealing. Its more traditional MPV outline is in direct contrast to the rugged Orlando, and there’s no getting away from the French machine’s people carrier status.

Inside, the firm’s trademark panoramic windscreen remains. It stretches back over the heads of the driver and front passenger, and combines with thin A-pillars and large quarterlight windows to provide unrivalled visibility. Our car also benefitted from a panoramic glass roof, which makes the whole cabin feel incredibly airy, despite the dark fabrics used throughout. The dash is unconventional, with a high-mounted gearlever, central dials and separate control panels for the heating and air-con at either side. Citroen’s signature fixed-hub steering wheel also features, and although the array of buttons is daunting initially, it quickly makes sense. The driving position is more upright than in the Chevrolet, though, and the seatbase lacks support. With five separate rear chairs, the Picasso’s cabin offers greater flexibility. The middle row can be removed completely, and each seat – including those in the rearmost row – slides back or forth independently to help improve legroom.

As a result, it’s usually possible to find a position that suits everyone. The third row folds flat or can be removed entirely, but access to these seats isn’t as easy as in the Chevy and there isn’t the same space. Slide the middle chairs forward to compensate, and their occupants suffer as a consequence.

The Citroen scores on luggage space – whether you’re using five or seven seats, it has the edge here. Exclusive trim also includes pneumatic rear suspension, which allows owners to adjust the load height using a button inside the boot. An opening tailgate window improves access in tight spaces, too.

If Citroen is renowned for its MPVs, its diesel engines are held in even higher esteem – and the 2.0-litre oil-burner is no different. It’s quieter than its rival’s unit, with smoother power delivery. Yet this is undermined by the notchy gearchange, which ruins the driving experience. It encourages you to use torque rather than shift ratios.

One thing you would expect from a Citroen is a comfortable ride, but our model’s optional 18-inch alloys mean the Grand C4 Picasso is disappointing here, too. It crashes and bangs over potholes and bumps. Things improve at speed, but it remains firm. Despite this, there is still lots of body roll in bends.

Worse, still, in tight corners you can feel the whole structure flex as the front tyres begin to lose grip. Drive the Grand C4 Picasso sedately, and it makes more sense, as the efficient engine promises decent fuel returns. But it only just edges out the more engaging Orlando at the pumps – which sets up a close finish.

Chart position: 2WHY: Clever interior and refined and frugal engine mark out the latest Grand C4 Picasso. It’s full of neat detailing and design touches – although they come at a price.