Chevrolet's muscular new people carrier takes aim at the class best - but does it do enough to come out on top? 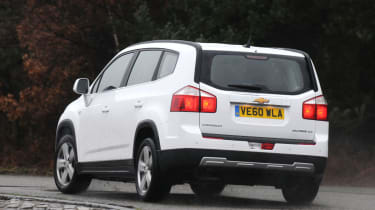 The Chevrolet brand has always provided top value, but don’t forget its cars. In the past few years, the firm has improved its line-up beyond recognition, and the Orlando MPV promises to be one of its best models yet.

The newcomer is sure to catch the attention of family buyers, thanks to its distinctive styling. Unlike the monobox designs favoured by the likes of Citroen and Renault, the Chevrolet has a traditional two-box shape. It doesn’t look like any of its class rivals, and there’s more than a hint of Fifties US station wagon to the quasi off-roader style. Up front is an oversized Chevrolet badge and an upright grille, while the car’s SUV-like detailing extends to mock skid plates and chunky plastic wheelarch trims. It’s not as wacky as its Citroen rival, but the Orlando stands out, and the masculine looks could well appeal to buyers not traditionally taken with the prospect of owning a people mover. It’s not perfect, though – the design is slab-sided, while the silver trim and small rear window give it a fussy appearance at the back.

It’s a similar story inside, where the Chevrolet is more workmanlike than the daring Grand C4 Picasso. The dash is separated by a low centre console, which creates a car-like feel. This is emphasised by the low-slung front seats and shallow windows. Overall, the driving position is better than in the Citroen, but the Orlando’s brake pedal is higher, requiring some awkward ankle twisting on the move.

Everything else is sensibly positioned, making the cabin a pleasant place in which to spend time. There’s an armrest between the front seats and, although material quality trails the C4, LTZ models are generously appointed. Cruise control, parking sensors, climate control, a leather steering wheel, ambient lighting and a USB port are all standard.

Sat-nav is a £750 option, unless you go for the £2,000 Executive pack, which also adds leather trim, heated seats and 18-inch alloy wheels. Family friendly features include a Picasso-style panoramic rear view mirror, which allows driver and front seat passenger to keep an eye on children sitting in the back. While the Chevrolet doesn’t have the sheer volume of storage cubbies as the Citroen, it does feature a clever space behind the stereo facia for MP3 players. The middle row is roomy, although the seats only split 60/40 and you can’t slide or reposition the bench. Access to the third row is better, though, thanks to the ‘roll and fold’ system.

Once you’ve raised the rearmost seats from their flat position, it’s clear they’re more accommodating than those fitted to the Citroen. And despite the Chevy’s sloping roofline, there’s more headroom back there as well. However, the shallow side windows and thick C-pillars make it feel more claustrophobic for passengers.

From the driver’s seat, the 2.0-litre petrol engine delivers decent performance, but does become coarse when you work it hard. Still, at constant cruising speeds the Orlando is refined and, thanks to its 13bhp advantage and lighter kerbweight, quicker to accelerate than its rival. This provides useful overtaking pace. On the downside, every gearchange is accompanied by a momentary drop in power, which takes the edge off acceleration. The Orlando has plenty of front-end grip and, while the gearchange itself isn’t perfect, it is better than the notchy Citroen shift. Body control is sharper in the Chevy, too, and it’s easy to forget you’re driving an MPV. Both cars sit in the same tax bracket, and official fuel economy figures are within 2.5mpg of each other.

Our returns were even closer, so running costs at the pumps will be similar. However, the Chevrolet comes as standard with the excellent 5 Year Promise – which comprises a five-year manufacturer warranty, roadside assistance and a full servicing package. Impressive stuff. So can the revised Citroen match this driver and ownership appeal?