Our New Car Award winner aims to live up to its top billing - but can it beat Korean sibling the ix20? 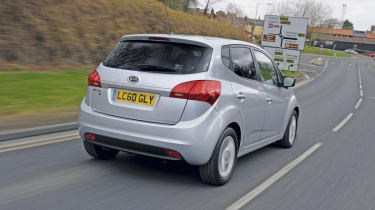 Since the introduction of the Picanto in 2004, Kia’s fortunes have steadily improved. And the Venga marked a watershed in this development, by claiming a first win for the Korean brand at our New Car Awards last year.

The Venga has plenty in common with the ix20, and the two relations are the most stylish here. With Kia’s familiar grille treatment, sharply styled lights and wide air intake, the car is neat and well proportioned. Viewed from behind, the Venga is clearly wider than the narrow-tracked Toyota and smaller Nissan.

Its size is obvious on the inside, too – it’s more spacious than the Note or Verso-S. At the wheel the Kia feels very grown-up, with a sculpted dash and deeply cowled instruments. It doesn’t boast the upmarket polish of the Hyundai, but has better-quality plastics than the other two cars in our quartet. The leather steering wheel and gearlever add a touch of class, while the upholstery is the most attractive of the lot.

The seats are very comfortable, and in range-topping 3 spec there’s an armrest for extended journeys. However, the driving position is upright and there’s no cruise control, which is a pain on long motorway stints. A two-piece panoramic glass roof is standard fit and, unlike the fixed panel in the Toyota, its front section can be opened in a similar way to a normal tilt/slide sunroof.

It makes the cabin feel bright and airy. Both sections of the 60/40-split rear seats slide forwards and backwards independently to maximise boot and cabin volumes respectively. There’s plenty of space and legroom for passengers in the rear as well. The Venga’s 440-litre load area is a match for that of its cousin. It even has an identical false floor, which ensures a flat area when the back seats are folded. And the similarities don’t end there. As with the Hyundai, the Venga’s 89bhp 1.4-litre engine trails the 99bhp Toyota’s for power. It never feels short of breath, though, as it is reasonably perky. Apart from a slight whine at the top of the rev range, it isn’t as obtrusive as the 1.33-litre Verso unit.

On the move, the five-speed box has a long throw, while stopping power impressed during our emergency braking test, where the Kia proved to be composed and effective. However, the steering feels artificial and is short on feedback, and the stiff suspension jolts over bumps and through potholes at low speeds. Plus, despite its firm set-up, there’s still plenty of body roll through bends.

This is one area where its ix20 cousin has enjoyed UK-specific tuning, and that car’s softer set-up makes it the more comfortable choice. The Hyundai is cleaner, too, as the Kia does without its rival’s stop-start. And to top it off, the Venga costs more – so the writing is on the wall for our former champ.

Chart position: 3WHY: It was named Best Supermini-MPV at our New Car Awards last year, and while it’s since been deposed by the ix20, Kia remains a quality choice.