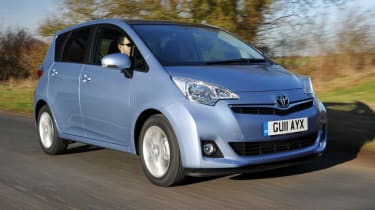 Toyota has limited the choice for buyers in the UK to just one engine in the Verso-S – a 1.33 litre petrol with either a manual or CVT automatic gearbox. That shouldn’t harm its chances though, and despite the lack of a diesel engine the Verso-S is an efficient and practical city MPV that makes a very clever use of its interior space despite its compact dimensions. There’s only one body style offered too, but as it’s aimed squarely at another five-door supermini - the popular Honda Jazz - that’s unlikely to put potential customers off.

The single engine option is Toyota’s familiar 1.33-litre four-cylinder petrol which delivers a modest 98bhp and 125Nm of torque. It feels nippy enough with just the driver on board, but would struggle with extra passengers and luggage. There are two transmissions, a six-speed manual and a CVT automatic. The CVT is ok around town, but noisy and hesitant on motorways which the manual would better suit. The handling is poised and there’s decent front-end grip, but the steering lacks feel and rolling refinement leaves a lot to be desired, with unwelcome wind and road noise entering the cabin at higher speeds.

Toyota does offer the Verso-S with its 1.4-litre D4D engine in other European countries, but for the UK the petrol is the only option. However because the Verso-S is so small and light it’s still miserly on fuel. Manual versions will return 51.4mpg and emit 127g/km of CO2 but the CVT is even more economical and claims a combined figure of 54.3mpg and emits just 120g/km. It’s pricier than some rivals but comes well-equipped and a five-year warranty is included as standard. It’s also cheap to insure and servicing should be cheap too as cars of this size don’t put much wear-and-tear on their tyres or brakes.

From the outside the Verso-S is pleasant to look at, with a crisp, modern design. It features the same single bar grille and aerodynamic front bumper as the Yaris. There are two trim levels, the entry-level ‘TR’ specification getting 15-inch steel wheels with plastic hubcaps, front fog lights and a solid metal roof. In T Spirit guise the Verso-S gets smart 16-inch alloys, a full-length panoramic glass roof, electric windows all round and tinted rear privacy glass. The cabin is functional but attractive and very easy to use, with Toyota’s Touch & Go infotainment system, which includes a reversing camera, Bluetooth connectivity and an optional sat-nav upgrade.

A clever arrangement means there’s a surprising amount of space in the back of the Verso-S. Even tall passengers can be seated in comfort, and the optional glass roof gives the cabin a light and airy feel. The top-spec model comes with a tyre repair kit instead of a spare, which increases room in the boot to a respectable 429 litres. You can also divide the boot into two layers with a flexible deck board, and the rear seats can be folded down at the touch of a single lever to increase space to 1,388 litres. There are 19 storage bins throughout the interior, and a three-level glovebox.

It hasn’t yet been crash tested but the Verso-S should perform very strongly in the Euro NCAP test as it comes packed with standard safety kit. All models come with front and side airbags and there’s even one just for the driver’s knees. Traction control is also standard across the range, as are ABS brakes with emergency brakeforce distribution (EBD). Normally Toyota have a peerless reputation for reliability to fall back on, but high-profile recalls in America and the UK have tarnished this reputation somewhat. The Verso-S feels well built though, and no mechanical problems have been reported. 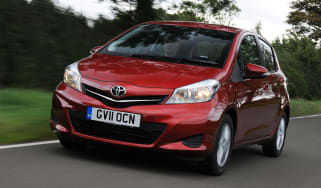 Toyota set to recall more than 5,000 Yaris and Verso-S models due to a potential power steering fault.
Toyota Verso-S vs rivals 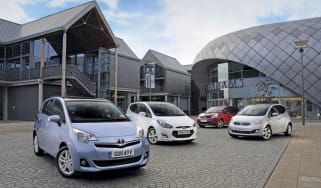 Supermini-MPVs are the talk of the town, offering practicality in a small package. Is new Toyota Verso-S the best of the breed?
Toyota Verso-S review 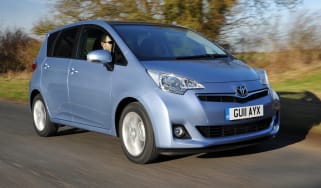 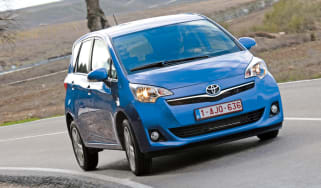 Toyota's return to the supermini-MPV sector, the Verso-S, promises to be the smallest and lightest car in its class
Skip to HeaderSkip to Content