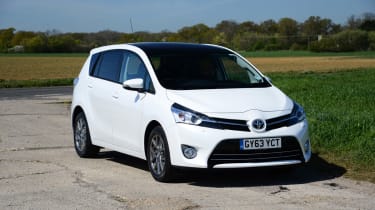 The more frugal and refined 1.6 diesel injects some much needed verve into the compact Toyota Verso. It may lack a bit of punch, but it’s the most efficient engine available in the range. You can carry seven people in the Toyota at a push – yet for similar money you can get your hands on a more practical, faster and efficient MPV from the likes of Renault and Citroen.

The compact seven-seat Toyota Verso is the first model from the brand to feature a BMW-sourced 1.6-litre diesel. It’s essentially the same engine that was used in the previous-generation MINI Cooper D – but how does it fare in the family-focused Verso on UK roads?

The unit has less power and torque than the 2.0 diesel it replaces: it delivers 110bhp and 270Nm, which represent drops of 12bhp and 40Nm respectively. But you wouldn’t know it, as it pulls strongly and the Verso picks up nicely from low down in the rev range.

Toyota has also tweaked the engine mounts to help deliver that power more smoothly, with things remaining hushed at low speeds. But press on past 3,000rpm and it begins to sound gruff and quickly runs out of steam.

Numb handling and limited braking feel also undo some of Toyota’s good work, but new springs give a cushioned ride. Shortcomings in performance are made up for by reduced running costs as the smaller engine is cleaner and more efficient, returning a claimed 62.8mpg and emitting 119g/km of CO2. The old 2.0-litre engine could do 57.6mpg.

Although an improvement, the Verso still can’t match its main European rivals from Renault or Citroen. It falls short on practicality, too. The Toyota’s one of the smallest seven-seat MPVs in its class, which makes it easy to park or drive in congested city streets, but significantly eats into space in the cabin.

The 440-litre boot is way off the Citroen Grand C4 Picasso’s 632-litre load area, and the third row of seats is a little too cramped. On the plus side, the flat floor means you can seat three adults in the middle row, while the simple tumble-and-fold seating mechanism leaves a perfectly flat loading bay.

Our top-spec Excel was well kitted out with Touch 2 infotainment, a rear-view camera, DAB radio and dual-zone climate control as standard. Unfortunately, the interior lacks any sort of sparkle, dulled by the flimsy materials and bare dash.