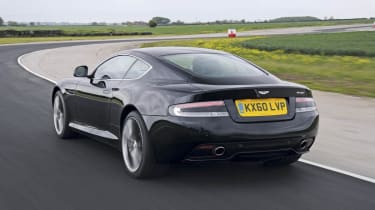 The arrival of any new Aston Martin is sure to get performance car fans excited. And while the original Virage from the late Eighties will never be regarded as one of the greats, the evocative badge has made a comeback as an addition to the DB range.

The newcomer sits above the DB9 in the pecking order, and features a range of visual additions that strike a perfect balance between aggression and style. They lend the familiar Aston shape a more athletic stance, and every panel, apart from the roof, is unique to the Virage.

A sharper shoulder line and deeper sills combine with headlamps that incorporate a bar of LED daytime running lights to help the model stand out. Few cars can compete with the SLS for kerb appeal, but the British coupé does exactly that. The luxurious details continue inside, and the cabin will be instantly recognisable to anyone familiar with the interior of a DB9.

The sense of occasion as you slide into the low-slung driver’s seat is hard to ignore. A mixture of glass buttons, hand-stitched leather, polished wood and milled aluminium gives the Virage a tailored feel that’s missing from the Merc. And while there’s no denying the solidity and build quality of the SLS, the Aston isn’t far behind. The driving position is perfect, too, while the alloy-backed dials and anti-clockwise rev counter all add to the uniqueness of the driving experience. Beneath the long bonnet is a V12 powerplant that produces 490bhp. However, its torque output trails the SLS by 80Nm, at 570Nm, and the Aston can’t live with its rival’s savagely fast in-gear performance. It’s still incredibly quick, though, and the V12 soundtrack is fantastic. An impressive 85 per cent of peak torque is available from only 1,500rpm, so it delivers effortless pace. Our figures for the Aston were compromised by very wet conditions at the track; the gap between these models is smaller than our data suggests.

On flowing roads, the chassis really impresses. Sharp steering and reassuring front-end grip combine with communicative controls to make the Virage engaging at all speeds. The car’s revised adaptive damping system ensures the suspension copes well with smooth tarmac, but the rear axle can be unsettled by uneven surfaces, and there’s more body movement than in the SLS. Both machines feature three-stage stability control systems, and the Aston’s driver-friendly middle setting allows some loss of traction before the electronics take over. The chassis highlights the deterioration of grip more obviously than the SLS, and forgiving suspension makes it easier to correct slides. This more laid-back character comes to the fore on longer journeys, where the British car’s GT credentials shine through. The Virage’s sports car handling clearly doesn’t detract from its abilities as a grand tourer, as it offers superior refinement and comfort at motorway speeds.

Fuel economy of nearly 21mpg also ensures trips won’t be interrupted by filling station stops as frequently as in the thirsty German machine.

Chart position: 1WHY: A unique cabin, hand-built V12 engine and established chassis all add to the latest Virage’s appeal. But is it a good enough all-rounder to slay the SLS?