They’re two of the most stylish cars money can buy, but is Aston Martin’s new thoroughbred Virage a better grand tourer than the Mercedes SLS AMG? 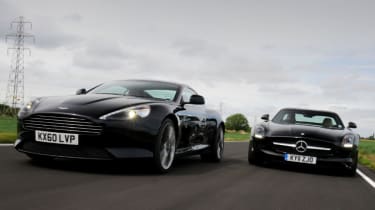 New car showdowns don’t come much more glamorous than this. The Aston Martin Virage and scintillating Mercedes SLS go head-to-head as we search for the ultimate grand tourer.

The Virage slots into the Aston line-up between the DB9 and DBS models, and aims to hit the sweet spot between full-on performance machine and refined GT.

But the Mercedes can boast ferocious performance from its 6.2-litre AMG V8 and, when you add in the sheer glamour of its jaw-dropping gullwing doors, it will take some beating.

Paying homage to the original 300SL Gullwing, the SLS certainly has the wow factor. It proves Mercedes can still build cars to rival the world’s most exotic offerings, and the thoroughbred creation is a technological tour de force. It leaves its rival in the shade with its twin-clutch seven-speed gearbox and 563bhp output.

The 490bhp V12 Aston relies on a more traditional approach, but it wears a stylish suit and is adorned by one of the most desirable badges in the automotive world. So, will British style or German muscle take victory? We hit the road and track to find out...

Both these models will figure on any list of the most desirable cars in the world – but that’s not the name of the game here. We set out to find the ultimate grand tourer, and we have a winner.

While the SLS is a fantastic sports car, with its brutal performance, excellent double-clutch gearbox and focused handling, it comes up short as a GT. You can’t ignore the historical nod to the original 300SL and those attention-grabbing doors, but the Mercedes is edged out narrowly by the Aston.

The difference is the Brit’s extra refinement and comfort. Not only is the Virage more muscular than a standard DB9, its enhanced handling strikes a wonderful balance between the involvement of a sports car and the refinement of a grand tourer. It doesn’t have the raw pace to match the Mercedes, but its smooth power delivery and engaging character more than compensate.