We try drop-top version of Mercedes' flagship supercar. Does it still convince without those amazing gullwing doors? 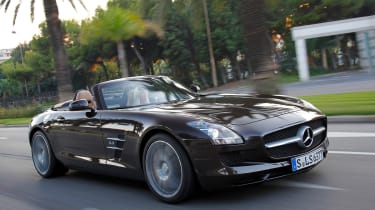 The SLS AMG Roadster pulls off quite a coup  - it doesn't suffer by losing the gullwing doors of its hardtop brother. Instead it brings extra thrills because it takes you closer to the action – the sound and the fury of that amazing 6.3-litre V8 engine. The fact that it's more comfortable and handles better than the standard car is a very welcome added bonus.

All it takes is a decent straight, a couple of gearchanges and a lift of the throttle. Then you're convinced that the Mercedes Benz SLS AMG is better without a roof – because while it lacks the drama of those gullwing doors, it repays that debt with a total assault on the senses.
Roof down, the new SLS AMG Roadster is completely dominated by its incredible V8 engine. Every single rasp, roar and rumble from the mighty 6.3-litre unit is fed directly to your ears, the lack of a hardtop barrier bringing new sounds to the cabin.
Starting from a low rev growl, the AMG-tuned unit opens its lungs giving a bass-laden NASCAR roar under full throttle, a sound matched by grin-inducing pops and bags from the exhaust when you lift off the accelerator. It's so thrilling you'll find yourself accelerating hard and lifting off just for the hell of it.

Which is just as well, because at £176,895, the SLS AMG Roadster is hardly what you'd call cheap – it's £8,500 more than the coupe and a staggering £70,000 more than the SL63 AMG, a car which is very nearly as fast and sounds almost as good.
What do you get for your money? Conventional (much lighter) doors and a triple-layer electrically operated canvas hood which, thanks to extensive use of aluminium and magnesium, adds only 40kg to the Roadster's kerbweight, despite additional strengthening for the chassis.
You also get a better-looking car. Roof down, the slightly tail-heavy stance of the coupe is evened out, while with the roof in place, it looks every inch the classy machine. You can choose from a variety of hood colours too while there's also new door trim, fixed rollover hoops and Mercedes' Airscarf system to blow warm air onto your neck on a cold day.
A plastic deflector between the driver and passenger keeps a lot of wind out of the cabin, and you can just about hold a conversation at motorway speeds. Roof up, the hood does a great job of insulating the occupants from the outside world while the mechanism itself is fast – just 11 seconds is all that is needed to raise or lower the hood, at speeds of up to 30mph.
The whole structure feels very stiff and free from wobble and in fact, the Roadster actually feels better to drive than the coupe. Changes made to the suspension have resulted in a more comfortable ride, while the car rolls less and feels more agile in corners. The brakes are sensational while there's plenty of grip from the huge tyres.
It's not perfect. Demand a couple of downchanges while braking for a hairpin and you'll be frustrated that the seven-speed twin-clutch 'box doesn't respond to a pull on the steering wheel paddles as instantly as it should, and while the steering is certainly direct and accurate, it lacks the precision and feedback of a Ferrari or Porsche system. What's more, the sheer width and weight of the SLS means it's still better suited to high speed sweepers than tight hairpins.
But these are all criticisms that can be levelled at the coupe too. What the Roadster adds is an extra dimension – it's more involving and even more exciting to drive, and the best bit is that thanks to the clever canvas roof not only can you soak up the sun, but you can also treat your ears to one of the finest, loudest sounds in motoring.
Share this on TwitterShare this on FacebookEmail