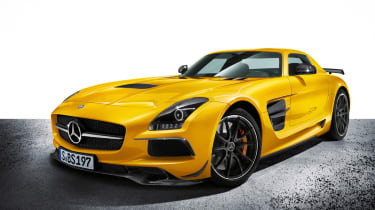 If you’re the kind of driver who thrives on adrenalin, this £230,000 SLS ticks all the boxes. It’ll lap a track only slightly quicker than the standard car, but it’s more about drama – and in that respect it’s mind-blowing, from the looks to the sounds to the ferocious pace. If you want something to drive on the road, though, this isn’t it.

Mercedes only attaches the Black Series badge to extreme, hardcore versions of already fast AMG models, so when the starting point is the SLS AMG supercar, you can expect fireworks.

The SLS Black Series has 59bhp more power than the regular car, taking the 6.2-litre V8 engine’s output to 622bhp at 7,400rpm. At the same time, 70kg is cut from the kerbweight, for a total of 1,550kg, while a set of huge Michelin Pilot Sport Cup tyres is fitted – so you’d expect the newcomer to shave more than a tenth from the 0-62mph time (taking it to 3.6 seconds).

There’s more to the Black Series than a stronger engine and stickier rubber, though. It has stiffer springs all-round, the engine now revs to 8,000rpm and AMG has slotted a gas strut between this and the body to prevent the movement of the 205kg V8 affecting the handling.

There’s a titanium exhaust, too – it’s one of a number of weight savings, which also include the fitting of carbon fibre seat shells, carbon ceramic brakes, a lithium-ion battery and a carbon fibre torque tube to the rear transaxle.

The exhaust makes the car much louder; while the SLS isn’t quiet, the Black Series is on another level. It adds a metallic rasp to the engine’s traditional snarl that rips through the air and makes your hairs stand on end.

Getting comfortable in this car isn’t easy, though. Even the painted white lines on the pitlane exit at France’s Paul Ricard circuit, where we drove the car, deliver a jolt into the cabin.

It’s also really difficult to drive the Black Series smoothly. Even with its wider rear tyres warmed up, it’s always the rear end that lets go first, and sometimes when you’re least expecting it. With its suspension in the full race mode, we found the Black Series couldn’t follow a standard SLS over the kerbs on a couple of key corners, and found it harder to tuck its nose into tighter bends.

The trick with this car is to drive it with white-knuckle aggression. On the track, stay off the kerbs and it will take chunks out of a standard SLS in corners and on straights, but you need to man-handle it a bit.

The brakes work best if used hard and the chassis responds best if you turn in quickly and hammer the throttle out the other side. This SLS is just brilliant on a smooth race circuit, but what about on the road? That’s another challenge for another day...