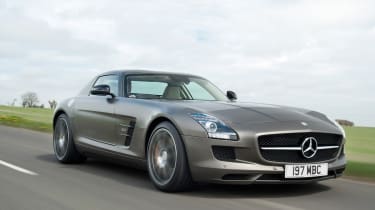 Admittedly these changes aren't revolutionary, and if they came with the £12,000 price increase we were originally told about then it would be tough to recommend. With a £3,000 price-cut, though, Mercedes has not only managed to make the SLS better but also better value. It's still not as sharp as something like a Ferrari 458, but for its usability and drama it's pretty much unmatched.

When a car looks as good as the Mercedes SLS AMG, you don't need to do much to spruce it up, so Mercedes has stuck to performance upgrades instead, and renamed it the SLS AMG GT.

Underneath the long bonnet is the same naturally aspirated 6.3-litre V8 as the old car, but with a larger intake manifold helping to increase power by 20bhp to 583bhp. Outright acceleration is as blistering as ever, with the official specs confirming a time cut from 3.8 seconds to 3.7 seconds.

As if the gullwing doors weren't enough to make people stop and stare, the SLS AMG GT has one of the best exhaust notes on the road. It pulses and rumbles at idle, growls on a light throttle and fills the air with the bassy rumble of a V8 racing car at full tilt.

Mercedes has reworked the software that controls the seven-speed dual-clutch gearbox to help make shifts faster. The gap in power between gears is now no longer a noticeable bugbear, but it's certainly not as brutally quick as the shifts in something like a Ferrari 458 Italia. The SLS does feel more at home around town than the Ferrari, though, taking off a lot more smoothly and accelerating seamlessly through the gears.

The suspension has been firmed up by 30 per cent at the front and rear, while the adaptive dampers have been stiffened up, too. Unlike the standard car you can't select a Comfort mode for them, with the choices now limited to Sport and Sport+.

The suspension changes haven't completely transformed the SLS but it has brought about a few important improvements. It still feels firm but compliant enough to never crash in to potholes, while it's a fraction sharper on turn-in, with the suspension a bit better suited to the quick steering. That long nose seems to dart in to bends with a newfound eagerness, while the tail feels less likely to step out under acceleration.

Look closely and there are a few little hints that this is the GT, rather than the outgoing SLS, such as the badge on the bootlid and darker lenses for the headlights and taillights. Thankfully there's no price increase, though, despite the fact we were originally told to expect an increase of around £12,000 over the standard car. Instead, the SLS GT costs £165,030 – £3,455 cheaper – and that is even more of an incentive to snap up the GT.