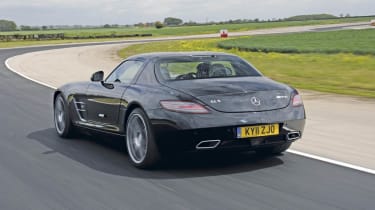 Few cars at any price can match the SLS for visual drama. It’s the most desirable car to wear the three-pointed star for decades, and its long nose and wide stance hint at the potential of its 6.2-litre engine. A stubby rear end and sleek profile give the Mercedes perfect proportions, but it lacks the classic beauty of the Aston Martin. Not that the SLS struggles to attract attention, as its gullwing doors are the ultimate party trick.

Once you get the hang of swinging your legs over the thick sill and sliding down into the cabin, the wide opening makes climbing in a breeze, especially in tight spaces.

Inside, the Mercedes is snug, but very comfortable. Only the tallest drivers will struggle for headroom, although the wide transmission tunnel and small windows give the compact interior a claustrophobic feel after a spell in the Aston.

However, the driving position is perfect and the seats supportive, while all the controls are logically laid out. Alloy-trimmed rotary air vents help set the SLS apart from the firm’s lesser models, but the familiar switchgear does take the edge off its exclusivity. It lacks the bespoke feel of the Virage and, while there’s no faulting its build quality, the interior simply doesn’t seem as special as the exterior. Press the glowing starter button and you’re given an instant reminder of what makes the SLS so desirable. The mighty 6.2-litre powerplant bursts into life with an unmistakable V8 bark – and it gets even better on the move. The rasping exhaust is accompanied by pops and bangs as you lift off the throttle around town, but it’s the sheer power of the hand-built AMG engine that come as the greatest shock. It packs a bigger punch than the Virage, with 650Nm of torque and 563bhp. At the test track, the SLS blasted from 0-60mph in only 4.1 seconds, and the closely stacked ratios of the seven-speed double-clutch transmission also worked to its advantage. The extra ratio makes for even stronger acceleration in the higher gears. In short, the Mercedes’ responses are sensational.

The engine really hits its stride above 5,000rpm, but the SLS is so fast that it’s impossible to enjoy this experience on public roads. Huge grip levels also mean you can’t explore the handling limits in this environment, and the car demands self-restraint.

Don’t mistake it for a simple dragster, though, as its chassis inspires real confidence. The steering is light, accurate and fast, while the stiff suspension restricts body movements in corners. There is a price to pay, and those large wheels deliver a firm ride, so it’s not as refined as the Aston at motorway speeds.

The modern-day Gullwing is an amazing sports car, and the best performance machine Mercedes has made for years, but its hard-edged character comes at the expense of comfort. In the search for the ultimate GT, that could prove critical.

Chart position: 2WHY: Inspired by a motoring legend, the SLS blends performance muscle from Mercedes’ AMG sporting division with a hi-tech gearbox and stirring looks.