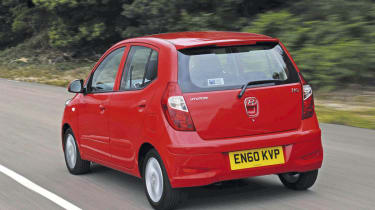 5
Few car makers embraced the Scrappage Scheme as enthusiastically as Hyundai, and the i10 reaped the rewards. The city model introduced the brand to a host of new customers, and notched up an impressive 23,565 sales in 2010, accounting for 44 per cent of the entire segment.
As our reigning city car champion, the i10 sets the benchmark against which others are judged – but the firm hasn’t rested on its laurels. In March, the tiny hatch got a makeover that included a new three-cylinder 1.0-litre engine, revised trim levels and tweaks to the styling.
Video: watch CarBuyer's video review of the Hyundai i10
[[{"type":"media","view_mode":"content_narrow","fid":"69310","attributes":{"alt":"","class":"media-image"}}]]
Here, we put the tried-and-tested 1.2-litre model through its paces in top-of-the-range Style spec. It doesn’t enjoy the arresting looks of its younger rival, but a new front bumper and headlamps bring the styling in line with other Hyundais such as the ix20 supermini-MPV.
With smaller 14-inch alloy wheels and a more upright stance than the Picanto, the i10 is less distinctive; the Kia is likely to be preferred by fashion-conscious buyers. The interior follows the same trend. There’s little wrong with the amount of kit inside the Hyundai – heated front seats, air-con and a proper iPod connection all come as standard – but the Kia provides even more equipment and has a more modern design.
Some of the materials in the i10 look cheap, especially the silver trim around the ventilation controls, but the switchgear is decent enough and build quality is a match for the Kia.The no- nonsense design provides plenty of space, and the i10 is longer and taller than its Korean stablemate. Rear passengers will notice a few valuable extra millimetres of legroom, and the 225-litre boot trumps the Picanto’s by 25 litres with the seats in place.
On the road, the Hyundai delivers a relaxed driving experience, which is perfectly suited to threading the five-door through crowded city streets. Performance is solid, and the i10 accelerated from 30-70mph in 11.4 seconds – that’s three-tenths faster than its rival.
A positive gearshift and more progressive brakes make driving the little city car a pleasure, while it copes with potholes and speed bumps more comfortably than the Kia – although the differences here are small. Tackling a corner with too much enthusiasm induces exaggerated body roll, while the front tyres surrender their grip earlier than the Picanto’s. But, overall, the i10 strikes a well judged balance between handling and comfort.
There’s little to choose between our contenders on the road, so the winner of this test is going to be the one that makes more sense financially. With a cheaper price tag and lower emissions, the Hyundai looks a surefire victor. Solid residuals of 41.2 per cent add to its appeal, although our experts have yet to calculate forecasts for the new Picanto.
It’s not all good news, though, as the i10 trails at the pumps. Plus, ESP costs £365, while Bluetooth is available only with sat-nav as part of an expensive £1,021 option package. Will that put off buyers looking for big-car kit?

Chart position: 1WHY: Small on the outside, yet big on the inside, the i10 is a fine city car. Low running costs, tidy handling and lively performance complete the picture.