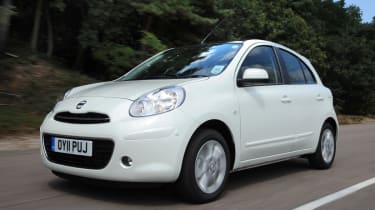 6
The latest Nissan Micra hasn’t had an easy start to life. It doesn’t offer the cute looks and fun personality of its predecessor, and slumped to defeat in its first road test against the Suzuki Swift and Hyundai i20.
But now, the Micra is ready to fight back. Bosses have performed a heart transplant on the newcomer, giving it a hi-tech engine that promises to mix petrol-like performance and responses with diesel-rivalling fuel economy and emissions.
Video: watch CarBuyer's video review of the Nissan Micra
[[{"type":"media","view_mode":"content_narrow","fid":"68625","attributes":{"alt":"","class":"media-image"}}]]
Based on the current 1.2-litre three-cylinder engine, the new unit employs a supercharger, direct injection and stop-start to deliver a low CO2 output of 99g/km. Plus, it promises fuel returns of 65.7mpg. But the question is, will this be enough to take the Micra to the top?
What’s immediately clear is that the Nissan isn’t going to secure the supermini crown on its looks alone. Sadly, the latest changes have been limited to the Micra’s mechanicals, which means you get the same ungainly exterior styling as before.
With its bulbous lines and clumsy detailing, the Nissan lacks the classy and grown-up appeal of the Skoda. Our range-topping Tekna test car gets attractive 15-inch alloys and extra chrome trim, but even these additions fail to boost the visual appeal.
Inside, the designers’ efforts have been more successful. The dashboard is attractively styled, and features a bold circular layout for the climate control unit, plus retro-inspired circular air vents. Better still, the large windows and standard glass sunroof help create a bright and airy atmosphere. You also get enough standard kit to shame far more expensive executive machines.
Take a look around the cabin and you’ll spot sat-nav, a Bluetooth connection and an iPod socket – you pay £930 extra to have these fitted to the Fabia. There’s even classy ambient lighting, which bathes the door pockets and centre console in an orange glow at night.
Unfortunately, even this lengthy list of standard features can’t distract you from the cabin’s low-rent feel. And cars with the firm’s built-in sat-nav, such as our Tekna model, don’t even get a simple 12-volt power socket.
All the plastics look and feel extremely cheap inside, while the fit and finish is no match for the well built Skoda.
Elsewhere, the instruments aren’t as classy as the Fabia’s, and the switchgear doesn’t operate with the same oiled precision. You’ll also find that some of the minor controls are scattered haphazardly around the dash, and hidden from the driver’s view.
At least the Micra is reasonably practical. Rear occupants get a surprising amount of head and legroom, plus there’s plenty of useful storage space – including a Fabia-style double glovebox. Only the 265-litre luggage compartment is a slight disappointment, as it offers 50 litres less space than its rival and has a high load lip.
Twist the key in the ignition, and the Nissan’s three-cylinder engine bursts noisily into life.
As the 12V power socket is replaced by an aux-in audio port and USB connector in Tekna trim, it meant we were unable to use our performance testing equipment to measure the Nissan’s pace. However, it’s clear the Micra is left trailing by the lively Skoda.
The supercharged unit feels limp, and the claimed 0-62mph sprint time is 11.3 seconds – which is a full 1.2 seconds slower than the official figure for the Fabia.
In the real world, the differences in pace are even more obvious. Overtaking moves have to be carefully planned, while the Nissan
lacks the instant urge of its rival around town. A slack and imprecise gearshift action only adds to the car’s woes.
Matters don’t improve when you turn the steering wheel. Not only is there very little feedback, there’s also a lack of grip, meaning the nose washes wide early in corners.
Away from twisting back roads, the intrusive engine and wind noise combine with a fidgety ride to make the Micra a tiring long-
distance companion. In fact, it’s most at home on crowded city streets, where the light steering, excellent visibility and standard parking sensors make it a confidence-inspiring partner. There’s also a smooth and swift-acting stop-start system.
This clever kit goes some way to helping the Nissan deliver sub-100g/km CO2 emissions, which means you won’t have to pay for an annual tax disc or access to London’s Congestion Charge zone.
However, its return of 38.5mpg still trailed the Skoda at the pumps. So is a second straight road test defeat on the cards for the Micra?