Entry-level Clio model is charming as well as great value 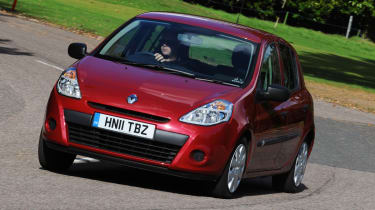 8
Perhaps the biggest compliment you can pay the Clio Pzaz is that it doesn’t look like a bargain-basement model. The entry-level car benefits from the same oversized lights, cheeky face and neat proportions as more expensive versions. Look closer, though, and you’ll notice bare trim on the door handles and rubbing strips, as well as plastic covers on steel wheels.
Still, it’s an attractive design, and Ruby Red metallic paint (a £455 extra) shows off the smart lines well – even if it pushes the price past £10,000.
Video: watch CarBuyer's video review of the Renault Clio
[[{"type":"media","view_mode":"content_narrow","fid":"69248","attributes":{"alt":"","class":"media-image"}}]]
Inside, the Pzaz shares its basic design with more expensive models. But unlike them, it uses low-quality hard plastics all round, with the rough material coating the steering wheel particularly disappointing. But there’s a decent stereo, which can be controlled by a steering column-mounted stalk.
The biggest letdown is the lack of air-conditioning – you can’t even have it as an option. However, the integration of fan speed and temperature control into one knob is a nice touch that proves easy to use. And there are other dashes of French flair, such as the bright white plastic used on the door handles and trim around the air vents.
The Clio also benefits from a much more low-slung driving position than its rival, making it easier to get comfortable at the wheel.
There’s plenty of room in the back, too, and the Renault matches the Suzuki for legroom, although there’s less headroom. Around town, the 1.2-litre engine is perky and a good fit for the five-speed box’s well chosen ratios.
The car is no firecracker against the clock, taking 13.5 seconds to complete the 0-60mph sprint. But in the real world, it’s willing and has no trouble keeping up with the flow of city traffic.
Still, despite its small wheels and high-profile tyres, the Clio has a firm ride. This can become tiring on the motorway, where it thumps noisily over joints and ridges.
A more assured performance is offered through corners, where its decent body control, direct steering and compact size provide surprisingly nimble and entertaining handling.
However, for a car that’s sure to appeal to younger and more inexperienced drivers, it’s disappointing that ESP isn’t even available as an option.
The 1.2-litre petrol engine is anything but youthful, and economy and emissions suffer as a result: it pumps out 135g/km of CO2. And while it should achieve 48.7mpg, we recorded only 37.6mpg during the car’s time in our hands, although that includes performance testing.
The Clio Pzaz offers plenty of car for very little money, but does it still have enough va va voom to see off the Suzuki Splash?

Chart position: 2WHY: Five doors, big boot and spacious cabin make the cheeky Clio a practical family supermini. Underneath, there’s a talented chassis, while outside, the neat styling still looks the part.