Spacious city car has rev-happy engine and lots of kit 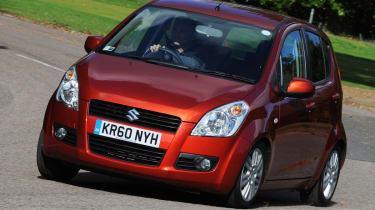 8
Small-car expert Suzuki is riding high on the success of the Swift supermini. But you shouldn’t overlook the brand’s capable Splash city car, which has recently been treated to the keen 1.2-litre petrol engine from its younger brother.
Lined up next to the Renault, it’s clear that the Suzuki takes its design cues from MPVs rather than hatchbacks. It’s almost 100mm taller than its rival and has a distinctive upright stance. The large headlamps, bold grille and full-height tail-lights give it a playful and cheeky look. In Copper Pearl metallic (£399), it certainly stands out, even if the bulkier silhouette means it’s not as visually appealing as the neatly proportioned Clio.
Things get better inside, where the Splash has loads of space. The high roof means it looks clumsy from the outside, but combined with the large expanse of glass, it makes the cabin feel much larger than it actually is.
There’s not as much design flair, although the rev counter mounted in a pod on the dash and the high-set gearlever are neat touches. Still, the SZ3 model is well equipped and has air-con as standard. Some of the switches are a little dated and it’s simply not as modern as the funky Clio, but the quality of materials used more than makes up for this.
The Splash is more practical, thanks to its extensive storage space, which comprises a waterproof area below the boot floor, a lidded cubby on the dash, large door pockets and a handy shelf above the glovebox.
As you’d expect, the driving position is higher up, so visibility is first-rate, while the seats offer plenty of support. Those in the back seats benefit from the car’s height as well – especially children who will enjoy a better view out.
The engine is the star of the show. The 1.2-litre is refined and features dual Variable Valve Timing (VVT), giving it an appetite for high revs. With 19bhp more than the Clio, the Splash covers 0-60mph in 11.7 seconds, which is almost two seconds quicker than its rival. Longer ratios blunt in-gear acceleration slightly, but it’s still a match for the Renault.
However, the higher centre of gravity takes its toll through bends, with more body roll and noticeable pitch and dive under acceleration and braking. Still, the Suzuki grips hard and its softer suspension soaks up bumps more effectively than the Renault’s. As with the Clio, ESP isn’t available. If you want the electronic safety net, you need to pay £540 more for the higher-spec SZ4 model.
The Splash’s 1.2-litre engine is not only a punchy performer, it’s highly efficient as well. Suzuki says it should return 55.4mpg, although in our testers’ hands it achieved only 37.4mpg, which is testament to how much fun the free-revving engine was.
More importantly, this car emits 16g/km less CO2 than the Clio, at 119g/km. That means annual road tax will set you back only £30 – a hefty £85 less than the entry-level Renault.
So, the latest Suzuki Splash is the best yet. You get a huge amount of car for your sub-£10,000 budget, and it’s cheap to run, too. The question is whether that’s enough to make it the winner of this test.

Chart position: 1WHY: With its MPV design cues, the Suzuki is even more spacious than the Renault, and SZ3 models are well equipped. The 1.2-litre petrol engine promises eager performance and low costs.