Revised car gets more efficient turbo engine – but is it still as fun to drive? 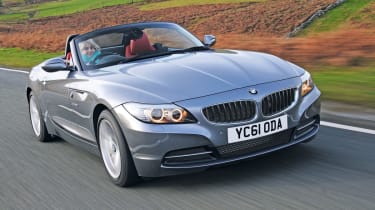 8
There are two schools of thought when it comes to putting a roof on a roadster: keep it simple, or go hi-tech. BMW has taken the latter approach with the Z4. No doubt spurred on by the success of the Mercedes SLK, BMW decided to engineer a complicated folding hard-top for its sporty two-seater – and that sets it apart here.
Advertisement - Article continues below
With its body-coloured roof in place, the Z4 doesn’t stand out as a drop-top like its fabric-hooded rivals, but a long nose and stubby rear end give the BMW classic roadster proportions. It looks lower and more athletic than the Audi and Nissan, and getting out the tape measure confirms this impression, as the TT and 370Z are 67mm and 34mm taller respectively.
The sporty approach continues inside, as you sit closest to the ground in the Z4. This is most obvious when you step back into the TT, which feels like a conventional hatchback in comparison. The snug BMW features lots of trademark black plastic, but the circular ventilation controls distinguish the roadster  from its saloon car stablemates. A logical layout, solid switchgear and simple instruments complete the no-frills approach.
When we tested the Z4 23i last year, it featured a 2.5-litre straight six, but time has caught up with this famous engine. It has given way to a new 2.0-litre four-cylinder turbo, badged 20i. This engine is 23bhp down on the old one’s 204bhp, but promises to improve fuel consumption from 33.2mpg to 41.5mpg. That’s all very well, but how does the new turbo compare with the Audi and Nissan engines?
Advertisement - Article continues below
Advertisement
Advertisement - Article continues below
The answer depends on your outlook, as the BMW is the cleanest and most efficient choice, yet trails its rivals for power and torque. This was obvious within only a few hundred yards behind the wheel, and our timing figures reveal the extent of the Z4’s performance shortfall. It completed the sprint from 0-60mph in seven seconds, which was 1.4 seconds slower than the TT and 1.6 seconds behind the Nissan.
Our in-gear figures reveal a similar gap, but if raw pace is important, there is a more powerful 242bhp version of the new engine (in the 28i), which has the same official CO2 emissions and fuel economy as the car we tested. But this model costs £33,645.
However, roadsters should be as much about handling finesse as straight-line speed, and that’s where the BMW should win over enthusiasts, as it rewards smooth driving. Its chassis puts a greater emphasis on comfort than outright handling, so there’s more body roll in corners and dive under braking than in its rivals. And when you floor the throttle, its nose points upward.
Advertisement - Article continues below
You need to manage the weight transfer all this movement generates to make the most of the Z4’s pace, as it’s all too easy to unsettle the car in corners with heavy or sudden inputs. Even if you do drive it smoothly, there isn’t as much front-end bite as you get in the Nissan, and it doesn’t inspire as much confidence as the sure-footed, all-wheel-drive Audi.
If you enjoy driving with the roof down, there are some other drawbacks to the BMW. Not only does the complex hood system take longer to fold away than the other cars’ soft-tops, but it also severely restricts the Z4’s luggage space.
Boot capacity drops from 310 litres to 180 litres with the hood stowed. That’s still big enough for a couple of large holdalls, but getting them in and out is the problem, as the roof mechanism leaves you with a narrow opening when you raise the bootlid. Such compromises are part and parcel of living with a convertible, but if you load the boot with the hood up and try to unpack with it stowed, the chances are you’ll have to raise it again before you can get your luggage out.
Considering that the BMW roof’s electric operation is slower than its rivals – and that it doesn’t do a much better job of cutting out noise than the Audi’s soft-top – it’s easy to see why many rivals continue with a traditional fabric covering.

Chart position: 2WHY: Out with the old and in with the new, as the Z4’s trademark straight-six engine makes way for an efficient four-cylinder turbo.