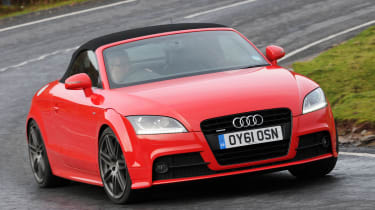 8
Few modern cars transcend the badge on their grille to become a recognisable brand in their own right – but the TT has done just that. It’s one of those cars that everyone recognises, and it’s easy to see why. It still stands out from everything else on the road.
In line with other Audi drop-tops, the TT has a high-quality fabric hood, and it’s a better car for it. The automated roof folds away in 10 seconds – roughly half the time taken by the BMW – and it’s neat and unobtrusive.
Advertisement - Article continues below
Best of all, it comes with a beautifully engineered wind deflector, which rises behind the seats at the touch of a button to cut draughts. It’s a far more elegant solution than the flimsy plastic panel that you have to clip in place between the headrests of the Z4.
Our TT looked even better thanks to its S line kit, which consists of 18-inch alloy wheels, lowered suspension, more aggressive bumpers and LED daytime running lamps. Cheaper Sport models are still sure to get you noticed, though, and they cost a significant £1,990 less than S line models.
The TT’s cabin is what we’ve come to expect from Audi. The high driving position isn’t particularly sporty, but circular air vents, high-quality fittings and simple dials create a classy atmosphere. And all models in the TT range come with climate control, as well as the tactile flat-bottomed steering wheel you can see in our photos.
Advertisement
Advertisement - Article continues below
Audi has blazed a trail for turbocharged petrol engines in recent years, and its 209bhp 2.0-litre is the perfect choice for a sporty roadster. It delivers serious firepower and has a bassy soundtrack that’s missing from the other cars in this test. With the twin-clutch S tronic gearbox fitted, every upshift is also accompanied by a sporty flutter from the exhausts, which adds to the experience. We expected the stiffer suspension of our S line model to be uncomfortable on the undulating Welsh roads of our test – but it wasn’t.
Advertisement - Article continues below
The combination of a 10mm lower ride height and bigger wheels didn’t have the negative impact we anticipated. The ride is undeniably firm, but the TT soaked up bumps effectively at low speeds and really came into its own on faster roads, where it resisted roll more effectively than the BMW.
Strong and progressive brakes, precise steering and impressive traction from the quattro four-wheel-drive system all helped to make the Audi the most confidence-inspiring choice on the slippery mountain roads.
It was comfortably the fastest car, and the TFSI engine is livelier than the BMW’s, yet more refined than the gruff Nissan. Hood-up refinement is also on a par with the metal-top BMW. But with more power and the added friction of four-wheel drive to contend with, the Audi is at a disadvantage at the pumps, although we returned a steady 28.9mpg – only 2.1mpg behind the slower Z4.

Chart position: 1WHY: The TT Roadster has a fabric hood and sweet 2.0-litre turbo engine. It sets the class standard.