Is the new turbo BMW Z4 the best choice for top-down fun? We test it against its rivals from Audi and Nissan 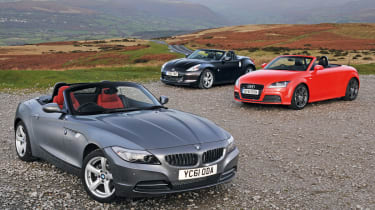 Take one roadster. Add a twisty road and stir in some beautiful views. Finish with dry, sunny weather for a truly unforgettable experience. It’s a simple recipe, but any car enthusiast will tell you it’s hard to beat a good roadster for driving thrills. So which should you buy?
BMW’s latest entry-level Z4 is a strong choice. The inefficient straight-six engine has been replaced by a four-cylinder turbo, making the car cleaner, faster and more economical. But can it beat two talented rivals?
Advertisement - Article continues below
First in line to see how the Z4 measures up is the Audi TT Roadster, which has been available with a turbocharger for years. The brilliant 2.0-litre TFSI model sets the class benchmark for the BMW to beat.
If it’s old-fashioned cubic inches you’re after, the final car in our line-up has the answer. The Nissan 370Z Roadster follows a more traditional approach, with a naturally aspirated 3.7-litre V6. So is that old-school character enough to power it to victory in this company?

Roadsters make lots of compromises in the pursuit of driving fun, and the car that demands the fewest wins here. The Audi TT appeals on every level. Whether you want an eye-catching car to impress the neighbours, something for weekend open-air thrills or an everyday driver, it’s the one to have.

It stands out with its assured handling, high-quality hood and classy interior. And if you think this S line looks expensive, lesser models are cheaper, without demanding huge dynamic sacrifices or styling compromises.

Second place goes to the BMW. The new turbocharged engine will mean it costs less to run than before, but the Z4 doesn’t have much personality and its hard-top feels over-engineered compared to the Audi’s simple fabric roof.

Bringing up the rear is the Nissan. It’s still able to put a smile on your face on the right road, yet has too many flaws to finish anywhere but last.

WinnerAudi TT Roadster ★★★★★ We were expecting a close fight, but the Audi merely underlined its superiority. From its unique looks and classy cabin to its composed chassis and lively engines, everything about the TT has been beautifully crafted. The result is a car that’s very rewarding to live with and own.

2ndBMW Z4 ★★★★ The turbocharged engine addresses many problems, but also creates some new ones. The 2.0-litre is more efficient and less polluting than before, but it has taken away some of the charm of the old straight-six Z4. Plus, while the engine is new, BMW has done nothing to fix the chassis, which is still tuned for comfort, not handling.

3rdNissan 370z Roadster ★★★ Flashes of brilliance from the 370Z are marred by too many flaws. If you can put up with the awkward driving position, tiny boot, flimsy hood and thirsty engine, this is a capable sports car. It’s fine for a short blast, but hard to recommend on a longer-term basis.