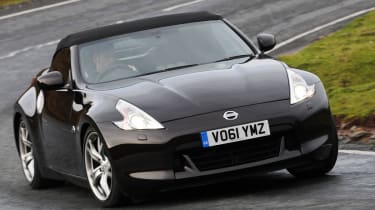 8
If you prefer your roadster thrills in a more traditional form, the Nissan 370Z should be high on your list. With a naturally aspirated 3.7-litre V6 and rear-wheel drive, it fits the bill of classic hairy-chested sports car.
The racy Nissan is brash in this classy company. It has a fabric hood that looks cumbersome when it’s in place and gives the car a hump-backed appearance when folded. Worse, it doesn’t provide any of the benefits typically associated with a soft-top: it takes longer to raise than the complex BMW hard-top and only works when the car is stationary. Plus, while the load space isn’t affected by the position of the hood, the 370Z can accommodate only 140 litres of luggage. That’s 40 litres less than the Z4 with its roof stowed.
Advertisement - Article continues below
What the Nissan lacks in practicality it aims to make up for with kit. In flagship GT trim, the 370Z was the only car to feature cruise control and heated seats as standard.
Sadly, the design of the cabin will come as something of a shock after spending time in the other cars. The quality of the interior is no match for the TT and Z4 and the steering wheel doesn’t have reach adjustment. This makes finding a good driving position tricky, and we found the 370Z uncomfortable on long drives, as the set-up forces you to sit too close to the wheel.
Advertisement
Advertisement - Article continues below
If these compromises give the Nissan a cheap feeling compared to the other cars here, the flimsily constructed fabric hood makes matters worse. With the roof in place, the car is noticeably less refined than its rivals. Drive it after spending time in the Audi, and you’ll think you’ve left one of the windows open. Drop the hood and a fixed glass wind deflector between the seats cuts draughts.
Advertisement - Article continues below
The 370Z’s trump card should be its muscular V6 engine. It’s the biggest and most powerful on test – its 324bhp output is a hefty 115bhp higher than the Audi’s. But the margin of its superiority was smaller than its raw power suggests, as our auto model was only two tenths faster than the TT from 0-60mph, with a time of 5.4 seconds, and it trailed the Audi in the drag from 50-70mph in fifth.
In reality, the 370Z has the performance to back up its sporty intentions, but it makes a disappointing sound. You get a muted growl below 3,000rpm, yet just when you think the V6 is about to erupt into a throaty roar, it instead becomes too harsh and noisy.
Still, the Nissan comes into its own on twisty roads. Changes to the 370Z last year included retuned suspension, and this results in an engaging driving experience. Its front tyres generate more bite than the Z4’s, and you can corner faster than in the BMW, too.
Ride comfort is compromised on bumpy roads, where the Nissan fidgets, but on smooth tarmac it’s the most rewarding, if not the fastest, drive here.
But the auto box is neither as quick nor as smooth as the Audi’s. Plus, mated to the V6 engine, it makes the Nissan a thirsty choice. We managed only 20mpg during our test – so it’s costly to run as well as to buy.

Chart position: 3WHY: Nissan has given a very traditional answer to the roadster question: soft-top, rear-wheel drive and lots of horsepower.