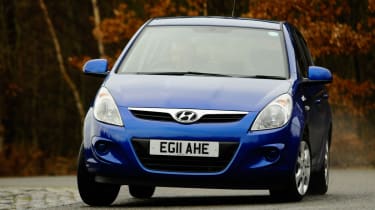 8
The Hyundai i20 has established itself as a competitively priced and solidly built supermini, and will be one of the new Aveo’s biggest rivals.
Designed with significant input from Hyundai’s European development centre in Germany, it looks pretty anonymous next to the Chevy, but its neutral styling will likely appeal to a broader spread of customers. However, there’s a counter argument that the exterior could do with more character.
The same can be said of the cabin, where the plastic steering wheel and gearlever make a pretty poor first impression. Overall, there’s not much to get excited about.
Take a little more time to get to know the i20, though, and you’ll see it gets the basics right. Like its rival, it’s well built and the driving position is comfortable, while the standard multifunction wheel adjusts for height and reach. The dash design is simple and inoffensive, with a straightforward layout that’s easy to get on with. Plus, while some of the plastics in out-of-the-way spots look and feel slightly low-rent, the older car is still on par with its brand-new rival.
The Hyundai has plenty of cabin space, too – rear legroom is almost identical to the Chevy’s and its 295-litre boot is five litres bigger. The latter is a surprise, as the car has a space-saver spare wheel, while the Aveo
makes do with a puncture repair kit.
The i20 scores well for kit, too. Unlike its rival here, you get front and rear electric windows and power-folding mirrors. As on the Chevy, Bluetooth and alloy wheels are standard, but cruise control isn’t.
The bizarrely oversized Blue Drive badges on the flanks of our 1.4-litre CRDi Blue test car indicate it has eco credentials to match the new Aveo’s. It emits 3g/km more CO2, at 98g/km, but that still means the car is exempt from road tax.
The engine has better pick-up low down, but like the Chevrolet’s, it’s a bit harsh above 3,500rpm. With the extra flexibility of a six- speed gearbox and an additional 20Nm of torque, the Hyundai overcomes its heavier kerbweight to record similar performance figures. Despite its slightly keener throttle response, there’s little difference in on-the-road performance between these two cars.
Head into a corner, though, and there’s a noticeable gap. The i20 has more body roll and less front-end grip. On the plus side, while the steering is artificially weighted, it has a fraction more feel than the Chevy’s. More importantly, the Hyundai’s softer set-up delivers a more composed ride than the Aveo’s chassis. So while it’s not very engaging to drive, it’s a good deal more comfortable than its rival.
Add this to the fantastic five-year warranty and recovery deal, and the i20 is sure to give the new Aveo a real run for its money.

Chart position: 1WHY: The i20 is an Auto Express favourite, so provides a formidable test for the new Aveo, especially in Hyundai’s eco-friendly Blue trim.