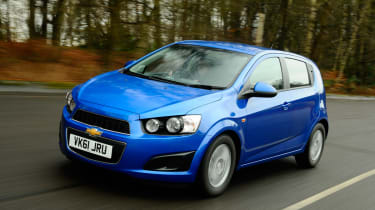 Choose the Chevrolet Aveo if you’re after a comfortable supermini that’s easy to drive. With a generous list of equipment and a big boot, it’s a car that’s up there with the Suzuki Swift and Hyundai i20 in terms of practicality and value.

This is the second generation of the Aveo that first went into production in 2011. The engine range includes an economical 1.3-litre diesel taken from the Vauxhall Corsa. Fuel consumption for this unit is 78.4mpg on the combined cycle and it emits a road tax-busting 95g/km of CO2.

Two petrol and diesel engines complete the Chevrolet Aveo engine range. There’s an entry-level 1.2-litre petrol engine with 83bhp, whie the 1.4-litre petrol has 99bp. They are tame at low revs and you have to work them hard to get any real power.

The 1.3-litre diesel borrowed from the Vauxhall Corsa provides much better performance with 94bhp and 190Nm of torque. But it's very unrefined and noisy, particularly on start up.  All engines come with a five-speed manual gearbox fitted as standard.

The Aveo’s light controls and slick gearshift make it easy to manoeuvre around town. However, the lack of feedback from the steering and poor body control means it lags far behind the Suzuki Swift or Ford Fiesta for driving dynamics.

The 1.3 VCDi desel is available in eco spec, which comes with a fuel-saving stop-start system and low-rolling resistance tyres to help it return a claimed economy figure of 78.4mpg and emit only 95g/km of CO2. But even without the eco tweaks, this engine manages 69.0mpg and emissions of 108g/km (or 74.0mpg and 99g/km if you opt for the lower-powered option).

The 1.2-litre petrol returns 60.0mpg, while the larger 1.4 unit manages 53.0mpg. However, opting for the six-speed automatic gearbox will cause fuel efficiency to drop to 46.0mpg and push emissions up to 145g/km.

Every Chevrolet Aveo comes with a five-year, 100,000-mile warranty, which includes one year's free roadside assistance to help keep other costs to a minimum.

Chevrolet’ signature double grille, swept-back headlights and creased metalwork makes the Chevrolet Aveo very stylish. The rear door handles hide behind the C-pillar and create the image of a sporty-three door rather than the practical five-door it actually is. Plenty of kit is standard on all Aveo trim levels but alloy wheels are only available on the LT trim or above.

The Chevrolet Aveo is available only as a five-door hatchback. It is more spacious than the previous model and the boot space has increased from 220 litres to 290. Fold the seats and you get 653 litres of space. That’s much bigger than the Suzuki Swift, which only has 211 litres and 528 litres of space with its seats folded. The boot opening is narrow, which makes loading larger items more difficult than it should be. 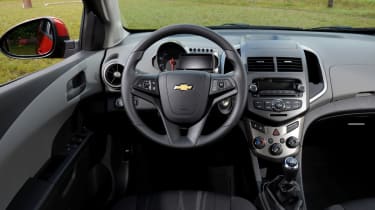 Head and legroom are both decent and there’s enough space in the back for two adults to sit in relative comfort. There’s also a neat twin glove box, with space for music players and CDs on top, as well as storage trays under the front seats.

Chevrolet didn’t get the best result in our Driver Power customer satisfaction survey. It was the worst brand in 2011 and didn’t even make it into the 2012 results. Things are improving. It finished 20th in the 2013 results and scored 81.15 per cent.

The Chevrolet Aveo itself didn’t make it into the survey but many of its tried and tested parts are borrowed from reliable Vauxhall and General Motors vehicles. No problems have been reported and only one recall has been made. It feels better built than the previous version, too.

As for safety, the Chevrolet Aveo has a five-star crash test rating, with a score of 95 per cent for adult occupant protection and 93 per cent in the safety assist category. Standard safety kit includes electronic stability control, seatbelt reminders and six airbags. The bonnet has also been designed to minimise injury to pedestrians. 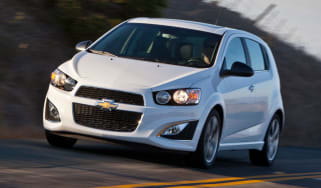 Our verdict on the Chevrolet Sonic hot hatch, which could come to the UK next year as the Aveo RS
Chevrolet Aveo vs Hyundai i20 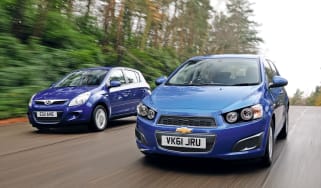 Chevrolet Aveo vs Hyundai i20

Has Chevrolet finally come up with a supermini class contender? We test the new Aveo against the Hyundai i20
Chevrolet Aveo 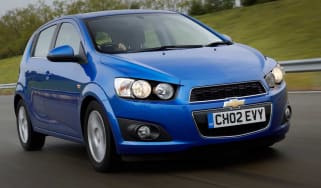 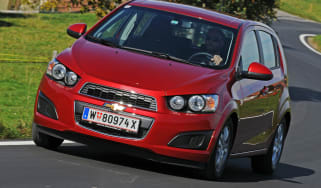 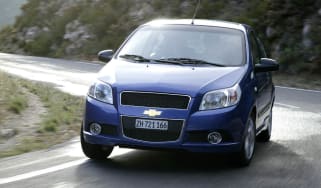 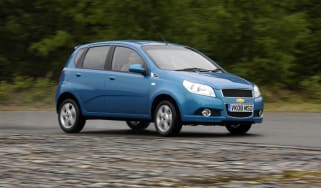 Chevrolet gives the also-ran Kalos supermini a subtle makeover and a new name. Is it enough?
Chevrolet Aveo 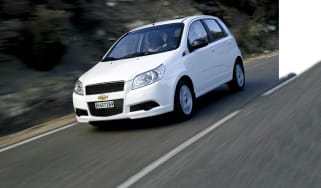 With better build, improved looks and a low price, the Aveo promises to be a city car bargain.
Chevrolet Aveo Hatchback review 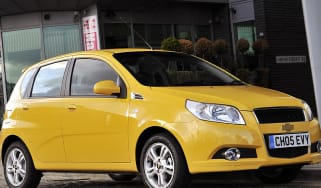 While the Aveo is well equipped and keenly priced, that’s not enough to make it a good buy.
Chevrolet Aveo 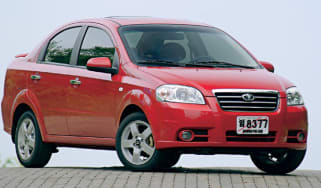 Auto Express has done it again! We're first to deliver a verdict on an all-new Chevrolet - and this time it's the turn of the daring Aveo.
Skip to HeaderSkip to Content