While the Aveo is well equipped and keenly priced, that’s not enough to make it a good buy. 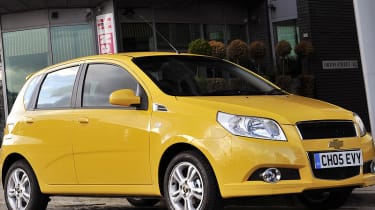 Driving Aveo buyers get a choice of two petrol engines, a 1.2-litre or 1.4-litre, both of which were used in the old Vauxhall Corsa. Both offer decent pace, particularly the 1.4-litre, although higher revs see them get noisy. The long-winded gearchange is also rubbery – and the gear ratios themselves are too tall. On motorways, the Aveo lacks response, yet even the lower revs don’t fully help cut engine noise. On the open road, it’s further let down by excessive body roll and numb steering. It’s not as enjoyable or as well polished as the best – the dynamics feel dated. Still, it’s great in down, dealing well with potholes and speed bumps, while it’s easy to place despite the thick A-pillars.

Marketplace Don’t be fooled by the Aveo’s smart nose. Underneath, many parts are shared with the older Kalos – revealed by a near-identical side profile. The biggest changes to the rear are fresh light clusters and a reshaped bumper. Park the two alongside each other and you’d be hard pressed to tell them apart. There is a choice of three-door or five-door bodystyles, and two petrol engines offered in a range of S, LS or LT trim lines. It competes with value alternatives such as the SEAT Ibiza, Skoda Fabia, Kia Rio, Hyundai Getz and Daihatsu Sirion, with keen prices and value very much its calling card.

Owning Despite outward appearances, the Aveo has a much-changed cabin over the older Kalos. The steering wheel is oversized and the column stalks remain very dated, but the rest of the interior has much-improved quality. It’s still not class-leading but the integrated stereo and silver finish on the doors and dash help lift the driving environment. Stowage space is lacking but there is good room in the rear, with lots of headroom and an airy feel. The boot is a decent 220 litres, boosted to 980 litres with the seats folded. It is extremely good value, too, with low prices and very comprehensive equipment levels, particularly on the range-topping LT.