Chevrolet gives the also-ran Kalos supermini a subtle makeover and a new name. Is it enough? 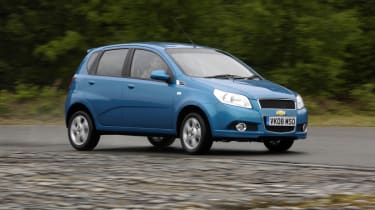 The new name isn’t enough to hide the fact that Chevrolet’s latest supermini is too much like its lacklustre predecessor. Based on the same underpinnings as the Kalos, it already feels dated, and doesn’t make a big enough step forward to be a real challenger in this class. Even the improved interior can’t match the standards of other equally priced rivals and, on the road, it lacks polish. In its favour, the Aveo is generously equipped, and rear passenger space is impressive, too... but there’s little else to recommend it.

While the Chevrolet name is well known, its cars aren’t a common sight on UK roads yet. But the US firm has big plans to change all that by launching 10 new models before 2012.

These include a seven-seater people carrier and a new city car, as well as a road-going version of the muscular Camaro concept unveiled at the Detroit Motor Show in 2006.

And all that fresh metal can’t come too soon for the brand. With the exception of the Captiva SUV, its current line-up is looking dated – and unfortunately, that includes the new Aveo.

If the latest hatch appears similar in profile to the Kalos it replaces, that’s because the new model is based on the same underpinnings. At the front, designers have tried to inject some style, adding a reshaped nose inspired by the Ultra WTCC concept. That gives it a more sporty feel, even if the positioning of the badge makes it look as if it’s slid off the honeycomb grille.

The layout is far from inspiring inside, either. The cabin is let down by some of the controls, particularly the column stalks, which have a low-rent feel. Still, quality has improved – it’s a huge step forward over that of the Kalos, and the finish is better.

Rear passenger space is adequate, and there’s an impressive amount of legroom for such a small car. The boot provides a decent 220-litre capacity, which is on a par with most rivals.

The Aveo will be sold with a choice of only two petrol engines – an 83bhp 1.2-litre and a 99bhp 1.4-litre – both of which are borrowed from fellow General Motors brand Vauxhall. We drove the more powerful version, and it offers decent performance. It can become noisy high in the rev range, though. Slack changes from the five-speed gearbox hardly enhance the driving experience, either.

Around town, the little Chevy is good fun for nipping in and out of traffic, although forward visibility is hampered by the thick A-pillars. The steering wheel is too big, so quick manoeuvres aren’t easy.

The suspension does a good job of soaking up bumps and potholes over urban routes. But on more demanding roads it lets itself down, as there’s minimal feedback through the steering wheel and too much body roll.

Although the Aveo feels safe and composed, it’s lacking in character and is neither engaging nor enjoyable to drive. It scores on value for money; the well equipped top-of-the-range 1.4 LT is £9,545, with the entry-level 1.2 S weighing in at £7,595.

The trouble is, the supermini sector is packed with talented and equally affordable rivals, and the Aveo lacks the quality and sophistication to be a serious contender. In short, Chevrolet hasn’t moved the game on as much as we had expected. As a result, the Aveo already feels dated.