We try the 78.5mpg diesel version of the Chevrolet Aveo supermini. 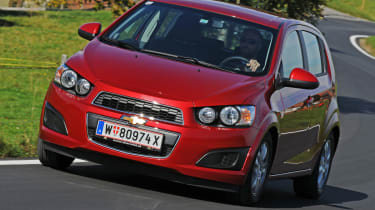 The Aveo is a good looking, comfortable and practical supermini that demands consideration, and this diesel version only broadens that appeal further. It's well-priced too, and comes much better equipped than rivals like the Kia Rio 1.1 CRDi. It's decent to drive too, but the rough engine note will put some buyers off, and it can't quite compete with the class leaders when it comes to quality.

While Chevrolet is keen grab headlines with the rebirth of its famous Camaro muscle car – it’s also introducing a new efficiency champion, the diesel version of the Aveo supermini we drove back in May.
The 1.3-litre VDCi diesel under the bonnet will be offered with either 74bhp or 94bhp, but all versions come fitted with an auto start/stop system as standard, which means the lower powered version emits just 97g/km, while the Eco version tested here is even cleaner, managing just 95g/km and returning an impressive 78.5mpg.
It’s the same unit fitted to the Vauxhall Corsa, and with 190Nm of torque on tap, it feels much more responsive than its petrol counterparts, and in-gear acceleration has significantly improved. It’s smooth enough when you’re cruising off the throttle, but like many eco-specials, if you start to push the engine; a gruff and clattery soundtrack starts to intrude the cabin, a problem that’s particularly noticeable in the middle of the torque band.

It’s a shame too, as the rest of the Aveo’s road manners are remarkably refined. Road and wind noise are both well suppressed, and it rides very comfortably indeed, and without the unwanted noise, the spacious and practical cabin is a relaxing place to spend time. The start/stop system is not the most sophisticated we’ve tried, pausing noticeably for each restart and sending noise and vibration into the cabin via the gearlever.
On the move, the Aveo strikes a good balance between handling poise and passenger comfort. The steering is positive and well weighted, and the lack of body roll, combined with generous amounts of front-end grip, means that it’s actually a surprisingly entertaining drive, even on skinny low-rolling resistance tyres. It’s not the equal of our current class favourite the Ford Fiesta, but it does cost significantly less.
The eco-diesel tested here only costs £600 more than the top-spec ‘LTZ’ petrol versions, still comes equipped with big car features like cruise control, electric windows and a USB connection, and undercuts the equivalent Ford Fiesta and VW Polo by over £2,500.
Share this on TwitterShare this on FacebookEmail