With better build, improved looks and a low price, the Aveo promises to be a city car bargain. 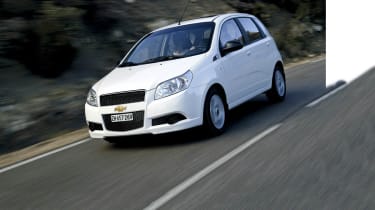 Despite using an old platform, the Aveo offers a level of quality that’s bang up to date. Traditionally a choice motivated by value for money, the updated Chevy now has the looks and appeal to attract a more fashion-conscious customer. The range is varied and the chassis responsive, but we’d advise sticking to the more frugal 1.2-litre engine. The whole driving experience is greatly improved by the quality interior, and sales success is on the cards.

The unwelcome ghost of Daewoo still hangs over Chevrolet’s reputation in the UK, but there’s light at the end of the tunnel. The Captiva SUV – the first new car made entirely under GM ownership – has been a great success, and now the big-selling Aveo has been refreshed to meet the same high standards.

It has the same platform as the outgoing Kalos, which sold more than 440,000 units across Europe. But besides a virtually identical profile, you would be hard-pressed to notice any similarities.

A two-part grille sporting the Chevy ‘bow tie’ is the most striking change, and is a development of the family face first seen on the Captiva. Round tail-lights in clear-glass housing and large wraparound headlamps complete the exterior updates.

The cabin feels surprisingly upmarket for a car of this size and class, with its huge air vents and integrated audio system. Soft-touch plastic on the instru-ment hood and door panels is another addition that makes a big difference.

Two petrol powerplants are available – a 1.2 litre and 1.4-litre already seen in the last Aveo, but revised to lift power outputs while boosting fuel economy. We tried the 98bhp 1.4-litre variant, which has undergone a 12bhp hike and benefits from a 10 per cent increase in mpg. It felt reluctant to rev, although this will no doubt improve once the engine has been run in.

Road noise was also a little intrusive, but we put this down to our car being fitted with grippy winter tyres which trade refinement for security.

Chevrolet’s aim is to capture customers who are on the lookout for cheap and cheerful motoring, but with a dash of badge prestige. Chevy is in the unique position of being a start-up brand in Europe, with piles of heritage to play with. And now the product quality is reaching acceptable standards, it’s clear that the Aveo is set to become a major success across the Continent.

The five-door model goes on sale in May, with the three-door following a month later. Prices are set to start from £7,500, and rise to £9,500 for the top-spec auto model